Much “remains to be seen” on how government change will impact Sudbury businesses
0
Aug 22, 2018 6:00 PM By: Karen McKinley 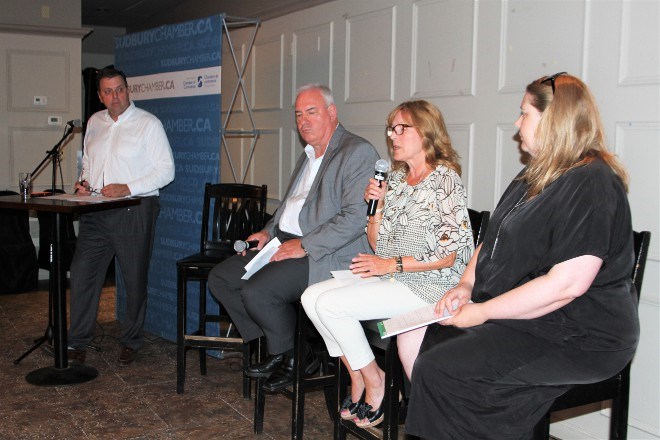 Guy Labine, CEO of Science North, left, moderated the panel discussion that included Doug Morrison, president and CEO of the Centre for excellence in Mining, Tracy Nutt, owner of ServiceMaster Sudbury and Build North Construction, and Ashley Challinor, vice president of policy and government relations for the Ontario Chamber of Commerce

Business owners in Sudbury are feeling relieved with the election of a new provincial government, praising it for taking “decisive” actions to signal it was ready to get to work.

However, there are others warning there's a lot of work needed to be done before anyone can claim victory.

A forum and panel discussion hosted by the Greater Sudbury Chamber of Commerce attracted an audience of about 50 people on Aug. 21. The theme was to discuss how businesses in the North can work with the new Doug Ford Conservative government at the helm.

On the panel was Doug Morrison, president and CEO of the Centre for Excellence in Mining, Tracy Nutt, owner of ServiceMaster Sudbury and Build North Construction, and Ashley Challinor, vice-president of policy and government relations for the Ontario Chamber of Commerce. Science North CEO Guy Labine was moderator.

Among the top concerns was how the Conservatives would receive the needs of businesses, given that the combined portfolios of Energy, Northern Development and Mines, Indigenous Affairs were assigned to one person, Kenora-Rainy River MPP Greg Rickford, and how the new government will handle Bill 148 and the minimum wage increase.

Challinor described the past few weeks as “breakneck” at the speed the government had been working to implement promises.

She explained the Ford government viewed the election as the ultimate consultation, especially on cap and trade.

They will slow down eventually, as staff is hired and the government settles into work, returning to a normal pace by the end of the year.

“They will move on some of their bigger promises this summer,” she said.

Nutt was pleased over the government's announcements, but added she wasn't sure how changes would impact the community from a business perspective. She highlighted aspects like Bill 148: Fair Workplace and Better Jobs Act, which she has been very opposed to, changes to Hydro One, and scrapping the cap-and-trade program.

“It's really too early to tell how or if these things will have an effect on us as businesses,” she said.

Nutt said she is happy to see the government is showing it understands how much small and medium-sized businesses have invested in the economy and communities by promising to cut red tape.

“It's refreshing, and almost like a pat on the back, given the toiling businesses do on a day-by day basis,” she said. “To be treated the way we were by the previous government was disheartening and, quite frankly, insulting.”

Morrison agreed with Nutt, but took a harder stance on waste and how big an impact the changes would have.

Morrison said the population has been asking the government to provide more services that communities used to provide for themselves. Small businesses should be given more credit for the role they play in providing services.

“There are a lot of problems to solve, and you can't solve them with from-the-hip answers,” he said.

He explained quick wins are satisfying, but there is a lot of work that is needed to improve the quality of life in the province.

On the Ring of Fire development and ongoing talks to build a road, Morrison surprised the room by saying he did not think the government should be funding a road. It should be concentrating on how to open the entire Far North for development, not just one relatively small area.

He explained building this road would cost more than a billion dollars, pointing out the budget was $750 million. It won't go directly to the site and not all the communities in the area would benefit from it.

“Construction-wise, if you've ever been to Pickle Lake like I have, you will see it is another 300 kilometres to the Ring of Fire, and it's all muskeg,” he said.

“To build a road out to that is not like the roads here, where we blast and crush rocks to make roadbeds.”

He added that there are more than 30 fly-in communities in the Far North, with many in “appalling” conditions, and only maybe three to five that may benefit from the development with a road.

Politics aside, the panel agreed the government signaling it was pro-business and wanted to work with them is a good sign.

Challinor said this government is more willing to find efficiencies and streamlining rather than slash services and budgets.

However, as Northern businesses, they also are concerned with Ford putting too much ministerial responsibilities on Rickford's plate.

With three massive files, he may not be able to give all of them the attention they deserve, the panellists said.

All three agreed they would've liked to have seen energy kept separate, but were confident Rickford could handle the expanded portfolio.