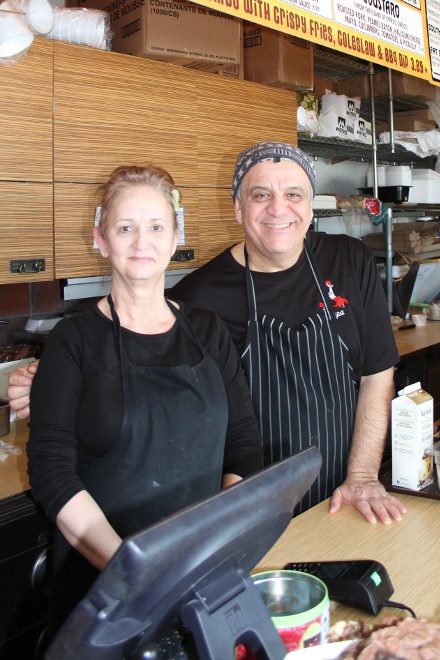 Sharon and Stelios Constantinou, owners of Vespa Street Kitchen in Sudbury, say they are nervous about the implications of the new minimum wage hike, but are taking it a day at a time.

Employees receiving minimum wage got a significant increase as part of sweeping reforms to workplace standards but employers are warning it is too much, too soon.
Many are warning they may have to make radical changes to meet that mandate.
As of Jan. 1, the minimum wage in Ontario went from $11.60 an hour to $14 as part of Bill 148, A Plan for Fair Workplaces and Better Jobs Act. It will jump to $15 an hour come Jan. 1, 2019.
The average minimum wage had held steady between $11.50 and $11.60 an hour since 2010.
Besides the wage bump, there’s expanded personal emergency leave to 10 days annually for all employees, and equal pay for part-time, temporary, casual and seasonal workers performing the same job as a full-timer.
For Sudbury restaurant owners Sharon and Stelios Constantinou, the wage hike has made them nervous, but they are hoping for the best.
They want to pay their staff more and would welcome a rise in minimum wage, but it would be better if it came at a slower pace.
The couple purchased Vespa Street Kitchen in Sudbury’s west end last September.
“I understand people want to make more money, and we want our staff to enjoy their job, so even though this is sudden, we are going to take this a day at a time and hope for the best,” Sharon said.
Stelios added he hopes these changes truly benefit staff, as it will in turn benefit the business.
“It’s like the old joke, happy wife, happy life. For us, it’s happy staff, happy establishment,” he said. “We are not making any major changes to hours, or staff, none of that. It’s scary right now because we don’t know the outcome. We can only hope this (wage hike) isn’t a problem in the future.”
Sudbury entrepreneur Tracy Nutt, who owns three businesses, said the sudden wage hike comes with unintended consequences.
“Businesses need to make a profit. If they can’t profit, they can’t stay open, they can’t create jobs.”
Nutt said it’s too soon to tell the immediate impact, but she’s preparing for some negative fallout.
She explained that many businesses are happy to pay their staff more, but it has to come at a slower pace to let them make adjustments to pricing.
Her other major concern is the changes being made to personal emergency leave days, sick days, and card-based certification that are not in current industries.
The spirit of the changes, according to the legislation, is to allow employees to take time off in the event of a personal or family issue, such as a sudden illness.
But Nutt is concerned that abuse of it could create staff shortages.
“It’s going to be a real jackpot. There are a lot of rules that are going to have to work together and how employers are going to have to stay compliant.”
She’s had meetings with her managers and said the changes will affect how they manage record-keeping and documentation, despite the government’s assurances there will be less red tape.
Nutt expects this will come back to hurt a lot of businesses already struggling with their bottom lines and it’s conceivable that many will fold or relocate.
“There’s this general consensus that businesses should just assume the added expenses, but there are businesses out there that don’t have a 25 per cent bottom line,” she said.
“Things like CPP, EI, all those payroll deductions are going to go up at the same percentage rate as minimum wage. It’s not a matter of paying the extra $2.40 an hour; it’s the added expense of all of those alphabets. “Not many understand what payroll costs a business.”
Michael Macnamara, chair of the Greater Sudbury Chamber of Commerce, said his advocacy group had been lobbying the province for months to reconsider parts of the act and the speed of its implementation, to no avail.
“It’s unfortunate now it’s law,” he said. “We tried to stop it before it got to that stage, get people on board and rally. Unfortunately, the government saw fit to pass it, regardless.”
Macnamara said there’s no opposition among business owners to an increase, but not a 32 per cent increase over two years.
“It puts much more demand on an employer from an HR perspective,” he said.
“What’s unfortunate is there were a lot of businesses that were already going above and beyond what they were already providing employees.”
One of the consequences of this added legislation is employers may have to scale back what they were offering of their own free will to put more resources into what they are mandated to provide.
This increase impacts a large portion of businesses in the local economy, he explained, with many either paying employees minimum wage, or offering services to those who have salaried employees.
He said other provinces are watching how the act is being implemented, and the impact of the changes on the economy.
“We are part of a big social experiment. Everyone is watching to see how this works,” he said.