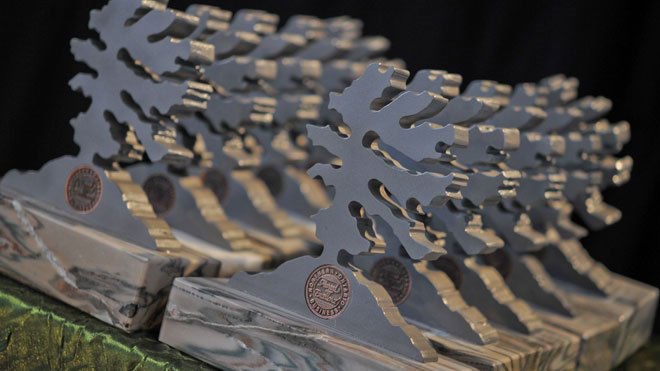 The best in business and innovation were recognized at the Northern Ontario Business Awards in Sudbury, Oct. 6.

Northern Ontario’s business community toasted the achievements of three outstanding individuals and eight remarkable companies at the 30th anniversary of the Northern Ontario Business Awards (NOBA) at the Caruso Club in Sudbury, Oct. 6.

NOBA has become the largest annual gathering of its kind in Northern Ontario since it was launched in 1986.  For 30 years, these awards have served to heighten the visibility and influence of business in the north and bring peer recognition to the business leaders who create prosperity and economic growth.  The 2016 event was co-hosted by Sudbury Mayor Brian Bigger and Northern Ontario Business Former Publisher Patricia Mills. Eastlink TV will showcase the winners in a television documentary to be aired Thursday, October 13th at 7 pm, Friday, October 14th at 11 pm, Saturday, October 15th at 9:30 am and Sunday, October 16th at 3 pm.

This year's winners are:

Company of the Year 1-15 Employees
Winner:  Northern Truss (Moonbeam)
Sponsored by: CIBC
In 1988, Luc Bouchard, a 25 year old father of three took a gamble on an idea, mortgaging his home to raise the funds to start his own business. Twenty eight years later, that gamble has more than paid off, as Northern Truss is still going strong and offering employment opportunities for young people in a small Northern town.

Company of the Year 16-50 Employees
Winner:  Morin Industrial Coatings Ltd. (Lively)
Sponsored by: OLG
Rick Morin was driving to work one day 15 years ago, when he viewed a cloud of dust lofting from his sand-blasting shop. That day, he became an agent of change and today this specialized and diversified industrial blasting and coatings company is recognized for its commitment to recycling and reclamation.

Company of the Year 51+ Employees
Winner: Tulloch Engineering (Huntsville)
Sponsored by: Northern Credit Union
Twenty-five years ago, this consulting survey practice started with seven employees. It now has more than 275 employees in 10 offices across the province, with another sizable acquisition in the offing this fall, putting the company well on its way to becoming the leading provider of surveying and geomatic services in Ontario.

Entrepreneur of the Year
Winner:  Pat Dubreuil (Sudbury/Dubreuilville)
Sponsored by: Kia Canada
This year’s Entrepreneur of the Year was inspired by his grandfather’s and father’s legacy of risk and initiative in the business world. Pat Dubreuil is the owner of the Relais Magpie Relay, a haven for snowmobilers across North America. Now he is helping consult on a plan to market the North as the ‘world’s best snowmobiling destination’.

Young Entrepreneur of the Year
Winner: Pipat Sripimolphan (North Bay)
Sponsored by:  Laurentian University
An electrical engineer by training, Pipat Sripimolphan started a new life in Canada in 2003. Thirteen years later, he has honed his skills in the hospitality industry as a successful four time restaurateur who continues to introduce new dining experiences to the people of the North.

Innovation Award
Winner: Haasen Farms Ltd. (Timmins)
Sponsored by: Huntington University
Innovation is integral to the sustainability of Haasen Farms and though it’s been part of the dairy farm for about five years, the state of the art technology employed still raises eyebrows every now and then when people learn robots are milking the cows.

Entrepreneurial Community of the Year
Winner:  Northern Centre for Advanced Technology (Sudbury)
Sponsored by: Air Canada
If there is a mantra to be followed at NORCAT, it might be: What’s next? Since its founding in 1995, this not-for-profit innovation centre has created, nurtured and celebrated a culture of innovation, safety and efficiency while promoting an entrepreneurial mindset that’s made it one of the cornerstones of the mining supply sector.

Judges' Choice Award
Winner: Maestro Mine Ventilation (Sudbury)
Sponsored by:  TD Canada Trust
Motivated by concern for the health and safety of miners, Michael Gribbons and David Ballantyne weren’t seeking financial success when they designed an air quality monitoring and control system. Raised in multi-generational mining families, both felt there was an unresolved issue to address with hardrock mining.

Export Award
Winner: Centric Mining Systems (Sudbury)
Sponsored by:  Export Development Canada
From the beginning, the owner of this information management company knew he had to take a global approach and tap into the export market. In 2005, Chris Novak began working on a deliverable software product. Today, the company has offices in West Australia and Indonesia with plans to expand to Central and South America.

Union Gas Essay Scholarship
Winner:  Devon Gavan (Sudbury)
Sponsored by: Union Gas
Devon Gavan doesn’t preach about environmentalism, but it’s been on his mind since he was a young boy, looking up at one of Sudbury’s best known landmarks, the superstack. Now a first year mechanical engineering student at Laurentian University, he hopes to continue to explore alternative forms of sustainable energy.

Mark your Calendars:  31st Annual NOBA – 2017 – in Timmins
The 31st annual Northern Ontario Business Awards will be held in the city with the heart of gold. For 2017, NOBA travels north to Timmins to recognize the important contributions of business to our economy and our communities. For more information on NOBA, contact Corissa Miles, Events Coordinator, 705-673-5705 ext. 304, 1-800-757-2766 or email inquiries to cmiles@nob.on.ca