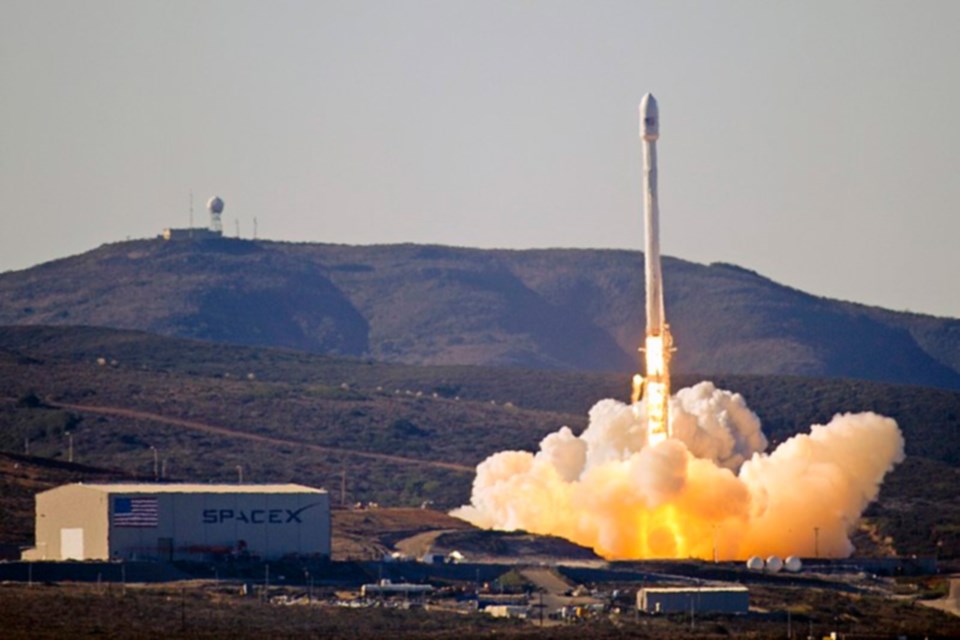 Kincheloe, Mich., could one day be home to a spaceport launching satellite-carrying rockets, smaller than the Falcon 9 rocket seen in this Wikipedia photo.

A small town in northern Michigan could be picked to be the site of a spaceport from which rockets would launch commercial satellites.

Kincheloe, once home to a U.S. Air Force base which closed in 1977 before the town became a location for prisons, a light airport and some small industry, is located 32 kilometres (20 miles) southwest of Sault Michigan and located in Kinross Charter Township.

Kincheloe is in the running with Alpena, Grayling and Sawyer (near Marquette) for the spaceport.

“One thing in our favour is we have a stretch of runway that’s not being used, and that’s what they’re looking at,” said James Moore, Kinross Charter Township supervisor.

The Michigan Aerospace Manufacturers Association has been seeking investors and federal permission for the proposed $80-million spaceport – being billed as the Michigan Launch Initiative – that would launch rockets carrying commercial satellites and also handle the takeoff and landing of airplanes that drop rockets that shoot into space.

Moore said he was first informed of the spaceport possibility March 16.

The satellite-carrying rockets launched from the spaceport would orbit around the earth’s poles rather than around the equator.

“That’s why they’re looking at Michigan," Moore said. "That would compete with anything coming out of launching sites in Florida or Texas...(and) it would mean more employment for our area."

It is not yet known when a decision will be made as to which of the four Michigan communities will get the spaceport.

The project’s organizers have requested $2 million in Michigan state grant funds to survey locations for the launch site and a command centre, the site having to be remote and close to the Great Lakes, so that rockets wouldn’t fly over populated areas.

If state grant funding is secured and approval is received from the U.S. government, rockets could blast off from Michigan by 2022.

The types of rockets that would leave the Michigan spaceport would be owned by private companies, smaller than reusable Falcon 9 rockets made by California-based SpaceX.