Left in limbo in Pickle Lake 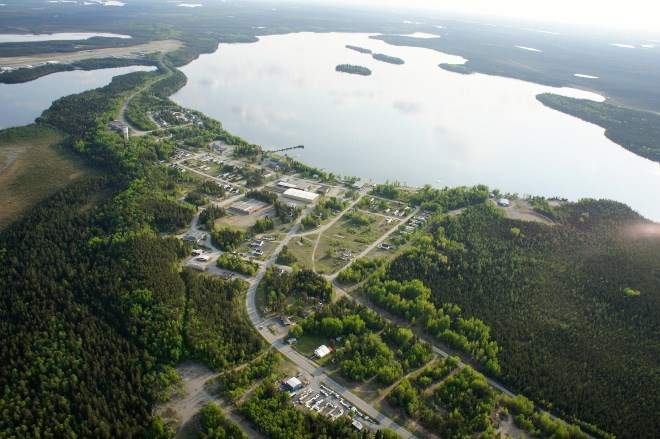 The Township of Pickle Lake wants to get in on any future action coming from the Ring of Fire but restrictive development rules stemming from old mine tailings has them at an impasse with the province.

The Township of Pickle Lake is impatiently waiting for answers from Queen’s Park on what to do with a four-decades-old environmental legacy issue that’s hampering local development.

The presence of arsenic in surface tailings at the former Central Patricia mine site has the northwestern Ontario community in a long-running standoff with three provincial ministries.

The mine site is located within the community and just off the highway that courses through town and runs north to service remote First Nation communities and Goldcorp’s Musselwhite Mine.

The tailings are spread over multiple places on the property, which ceased mining in 1954.

Until mine closure plans were imposed by the province in the early 1990s, companies could walk away and leave their mess behind with no obligations.

But new provincial planning regulations forbid the township from doing any new development near the mine site.

Pickle Lake is located at the extreme north end of Ontario’s highway system and on the western edge of where one of two Ring of Fire access roads is expected to start construction in 2019.

The municipality is waiting on the draft of a soils study from the Ministry of Northern Development and Mines (MNDM) that will shed some light on how to tackle the problem.

Hopf, who was expecting its release in March, said it should identify the problem spots, provide an accurate measurement of the volume of tailings, outline remediation options, and the cleanup costs.

Twenty years ago, when engineering consultants Proctor & Redfern studied the site and laid out some choices, the cleanup estimates were between $3 million and $20 million.

“We want the province to come up with a permanent solution as to the state of that land, one way or another, which they’ve never done,” said Hopf.

For many years, he said the Central Patricia property wasn’t listed in the province’s Abandoned Mines program.

“Hopefully, we’ll have another meeting and have an idea what the province wants to do.”

Land at and near the old mine is important to Pickle Lake.

Hopf said they want to capitalize on any economic spinoffs from an east-west Ring of Fire road with an industrial park and highway-commercial development.

A year ago, an arsonist torched Pickle Lake’s gas station.

Hopf wants the tailing issues addressed before traffic on the road starts flowing. He has no assurances that any kind of remediation will take place this year.

Using what leverage they have, Hopf asserts the township won’t be signing off on a new Official Plan until the Central Patricia site is resolved.

Comments from MNDM and the Ministry of Municipal Affairs and Housing weren’t immediately available.

Preparatory work on the Ring of Fire east-west road appears to be underway as the Ministry of Transportation is upgrading and beefing up Highway 599.

Months before Premier Kathleen Wynne made her mine and community road-routing announcement last summer, Hopf said there were survey crews on a 300-kilometre stretch of 599 between Pickle Lake and Sioux Lookout, and north of town.

Two bridges are being replaced and a gravel road which runs northeast to connect into the winter road network, known locally as the North Road, is being paved for the first time.

But Hopf is in the dark on the province’s grand transportation strategy for the Ring of Fire.

Pickle Lake is working with Sioux Lookout on a truck-to-rail intermodal facility project to handle ore coming out of the James Bay lowlands.

His biggest concern is that when Noront Resources switches from nickel to chromite production that those tonnages will be diverted onto a north-south road, leaving area communities and local business in the lurch.

“They better not try to scam us and kill this (road) system into the first mine by switching everything to go north-south. There’ll be a big argument if that happens.”

Australians stake more ground near Pickle Lake
Feb 24, 2020 9:55 AM
Comments
We welcome your feedback and encourage you to share your thoughts on this story. We ask that you be respectful of others and their points of view, refrain from personal attacks and stay on topic. To learn about our commenting policies and how we moderate, please read our Community Guidelines.