Province announces planning to start for Ring of Fire road

Province will partner with Webequie, Marten Falls and Nibinamik First Nations to ‘plan and construct a year-round access road into the proposed mining development side being pursued by Noront Resources.'
0
Aug 21, 2017 11:26 AM By: Northern Ontario Business Staff 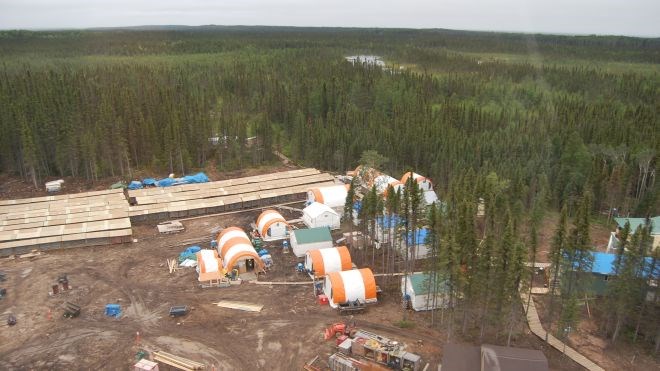 An aerial view of Noront Resources’ Esker Camp in the Ring of Fire. (Noront photo)

The province has announced planning will begin on an access road into the Ring of Fire.

On Aug. 21 the province said it would work with Webequie, Marten Falls and Nibinamik First Nations to “plan and construct a year-round access road into the proposed mining development side being pursued by Noront Resources.”

“I am grateful to the Matawa First Nations who have been working with us for years to get to this historic day,” Wynne said in the announcement.

“The entire Ring of Fire region has huge potential for development that would benefit all of the communities involved and the entire province — creating new jobs and improving the quality of life for people in the North. Getting shovels in the ground to build this connection to the Ring of Fire will move us forward towards unlocking its full potential.”

In a release, the government said the plan calls for an east-west road connecting the Webequie and Nibinamik communities to the provincial highway network north of Pickle Lake. This project would provide all-season access to both First Nations communities as well as into the Ring of Fire development.

The province is also supporting Marten Falls First Nation to plan and construct an access road connecting the community to the existing provincial highway network at Aroland/Nakina.

Communities are working to begin environmental assessments of these projects by January 2018, and plan to begin construction in 2019, pending all necessary approvals.

Marten Falls will undertake technical and environmental studies in advance of a north-south access road tied to the development of chromite mining in the Ring.

The province said it would support the communities as they “address all regulatory requirements so that this unique environment is protected.”

The mineral-rich Ring of Fire, located in the remote James Bay lowlands, is being eyed by miners like Noront and KWG Resources as a top source of chromite — a key metal used in the manufacture of stainless steel.

Noront remains the furthest ahead with its plan for the area. It proposes starting construction on its Eagle's Nest mine site in 2018, followed by work on its Blackbird chromite deposit.

“Establishment of a road network with agreement on industrial access is our most important project advancement milestone and we are very pleased to see it move ahead,” he said.

“We look forward to working closely with the province and First Nations communities through the road construction and mine development processes.”

Webequie Chief Cornelius Wabasse said the project will allow for the development of roads, transmission lines and broadband, but emphasized protection of the land is a priority for Webequie residents.

“Our Land Stewardship and environment protection will be a priority for the people of Webequie First Nation, as it is our inherent right stemming from our three tier land base model to implement benefit relationship agreements with both levels of government,” he said in the release.

“The success of the related project development in the Ring of Fire is dependent on the immediate implementation of the statement of joint commitments developed with the Province to work with the community on various jurisdictional matters.”

“As the historical occupants of the Ring of Fire, we believe that mining development must be both environmentally and economically sustainable and we want to develop infrastructure that enables a multi-generational chromite opportunity,” he said.

“Today's announcement is a new beginning and we will continue to work with Ontario on the commitment to undertake further study toward developing our vision of a north-south industrial corridor that transverses a majority of Marten Falls territory as part of the long-term development of the Ring of Fire.

"This is a very significant opportunity for Marten Falls, the north-south region and for the province. We must make the most of it."

The announcement has been a long time coming. The province previously committed to providing $1 billion in funding for a permanent road, and Wynne said the support being provided to build road access is part of that commitment.