The road to the Ring of Fire needs to go east-west, say northwest communities 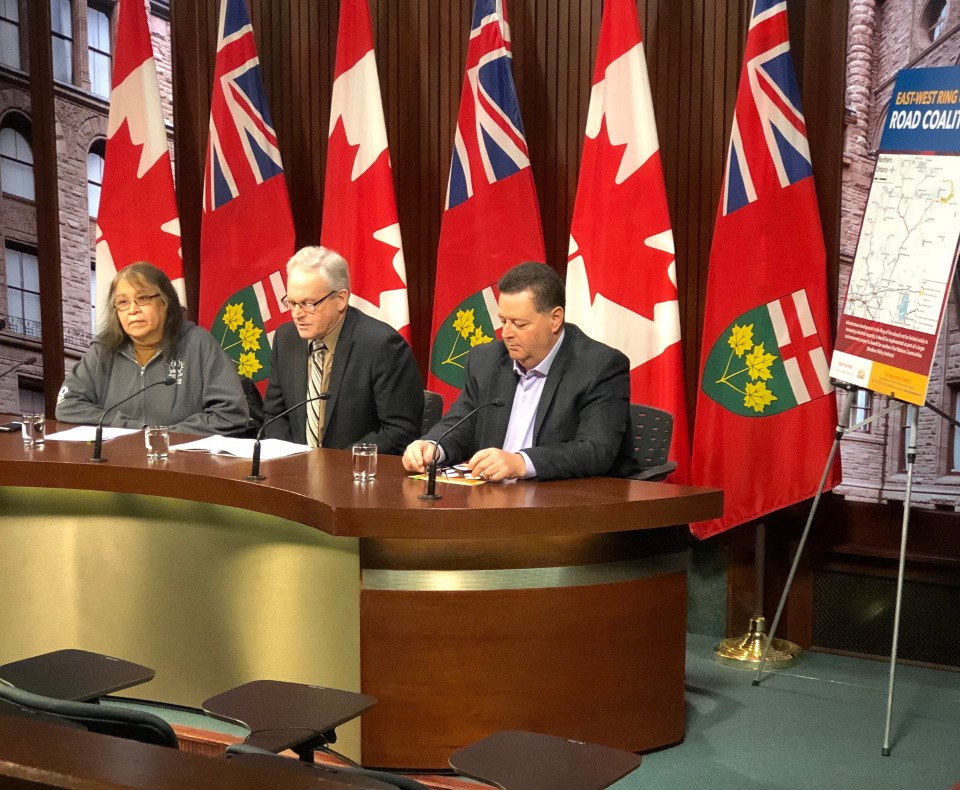 A forgotten path into the Ring of Fire still remains on the radar for a group of northwestern Ontario community leaders and businesses.

The East-West Ring of Fire Coalition went to Queen’s Park during mining week in Toronto to lobby government for support of a permanent road into the Ring of Fire.

The group claims an east-west route will deliver greater spinoffs and social benefits to area communities, compared to the north-south road being championed by the provincial government and the mining industry.

It’s the second consecutive year the group has journeyed to Toronto during the Prospectors and Developers mining conference to make their case for government to consider a less-environmentally invasive alternate route into the James Bay mineral belt.

The East-West Ring of Fire Coalition consists of the municipality of Sioux Lookout, the First Nation communities of Lac Seul, Cat Lake, Slate Falls, and Kitchenuhmaykoosib Inninuwug; and businesses such as Morgan Fuels and Perron Contracting.

In a March 2 news release from the coalition, Darrel Morgan, president of Sioux Lookout-based fuel hauler Morgan Fuels, said an all-season east-west road would likely follow the existing winter road network, the route chosen to deliver most of the fuel, food, building materials and other goods overland into many remote communities.

“Important transportation assets such as rail, road connections to the TransCanada highway and air service can be accessed via an east-west alignment. The Sioux Lookout Regional Airport already serves as a key air access hub for 31 First Nations in the region,” he said.

The east-west road was one of two corridors initially proposed by the previous Wynne government in 2017 as an overland route into the Ring of Fire.

But resistance to road development by a handful of First Nation communities along the path of the route swayed the province to fund the environmental assessment and preliminary engineering for a north-south right-of-way, including the recently announced second leg of a proposed road between the communities of Marten Falls and Webequie.

The group is throwing its support behind Ottawa’s decision to launch a regional environmental assessment (EA) for the entire Ring of Fire projects area, a new region-wide approach to Far North development.

“The stakes are high. Planning and development of access to Ontario’s Far North is a complex undertaking. All options need to be considered with care. This will shape the future of the entire North.”

“All season road access to my community of Cat Lake is critical to our future. It is important for health care for the elders and the economic and education opportunities of our youth.