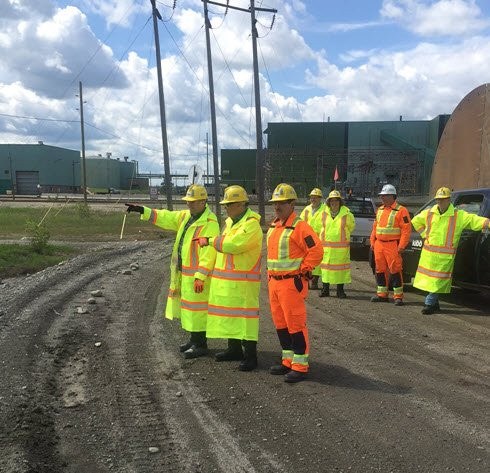 Timmins Mayor Steve Black helped Noront Resources in its search for a smelter location with a tour of the Kidd Metallurgical Site in this photo tweeted by Noront in 2017.

It looks to be July, or possibly even deeper into the summer, before Noront Resources announces a Northern Ontario processing site for Ring of Fire chromite ore.

The Toronto mine developer has yet to make public its choice from one of four landing spots put forward by Sault Ste. Marie, Sudbury, Thunder Bay/Fort William First Nation and Timmins to place a ferrochrome processing plant.

In early February, at the closing of a four-city bidding process, Noront hired Hatch Engineering to help evaluate the packages over the next three to four months.

Noront spokeswoman Janice Mandel dismissed any suggestions the company is waiting for Algoma Steel (formerly Essar Steel Algoma) in the Sault – with its associated industrial port lands – to emerge from creditor protection or that the company is monitoring the deteriorating state of trade relations with the U.S., where Noront’s semi-finished ferrochrome product would be shipped to stainless steel manufacturers.

“I believe Noront said in early February that a decision would take three to four months, so technically they have exceeded that timeline,” Mandel replied by email.

“However there’s no specific reason, it’s just a process that takes time. None of the factors (above) have created an issue.”

Last summer, Noront president Alan Coutts told Northern Ontario Business he wanted to see how the CCAA (Companies' Creditors Arrangement Act) restructuring process at Algoma Steel shook out before considering whether or not to drop the Sault from its shortlist.

“There is some complexity around the CCAA process in the Sault and we’d like to really understand that and see some outcomes before committing or dismissing that site,” Coutts said at the time.

The province’s lack of progress in striking a deal and choosing a route that’s agreeable with the communities of the Matawa First Nations has been an obstacle to development, forcing Noront to extend its timeline for the start of mine production to 2023.

Late last August, then-Premier Kathleen Wynne announced planning had started on proposed north-south and east-west roads into the Ring of Fire, to be followed by environmental and technical studies with construction starting in 2019.

While it may be five to 10 years out before the first ore shipment, it’s become apparent that only one route – the north-south corridor – is making any headway.

Just days before the start of the Ontario election, government funding was approved to start the environmental assessment (EA) for the first leg of the north-south route to Marten Falls First Nation, a development-friendly community and a Noront stockholder. Marten Falls made the announcement in the middle of the election.

Simultaneously, another EA process started for a service road between the exploration camp and Webequie First Nation, the road proponent and the closest community to the Ring of Fire.

A provincial environmental assessment usually takes two years with Ottawa yet to weigh in with its process through the Canadian Environmental Assessment Agency.

An east-west road appears to be out of the picture at this time.

The communities of Nibinamik, Neskantaga and Eabametoong have either softened their support for a shared industry-community road or stand in outright opposition over issues concerning consultation and control of an east-west access corridor.

Mandel said the company doesn’t have a preference and isn’t wedded to one particular route.

“Noront is supportive of both routes as either one will meet their needs. They will use whatever road is developed first. They’re not the proponent and will follow whatever recommendation is made.”

A summer-long wait to choose a smelter site would afford Noront an opportunity to negotiate a favourable industrial hydro rate with the province for its Ring of Fire projects and get acquainted with the new cabinet of the incoming Doug Ford government, slated to be sworn in June 29.

The change in government after 15 years surely signals a senior bureaucratic shakeup, especially at the Ministry of Northern Development and Mines, a restructuring or elimination of the Ring of Fire Secretariat, and a possible rebooting of the stalled 2014 Regional Framework Agreement negotiations with Matawa First Nations.

That process was to create a development road map for the First Nation communities to participate and benefit from industrial activity in the James Bay lowlands through a resource revenue sharing agreement.

Village Media acquires Northern Ontario Business
Mar 20, 2020 9:21 AM
Comments
We welcome your feedback and encourage you to share your thoughts. We ask that you be respectful of others and their points of view, refrain from personal attacks and stay on topic. To learn about our commenting policies and how we moderate, please read our Community Guidelines.