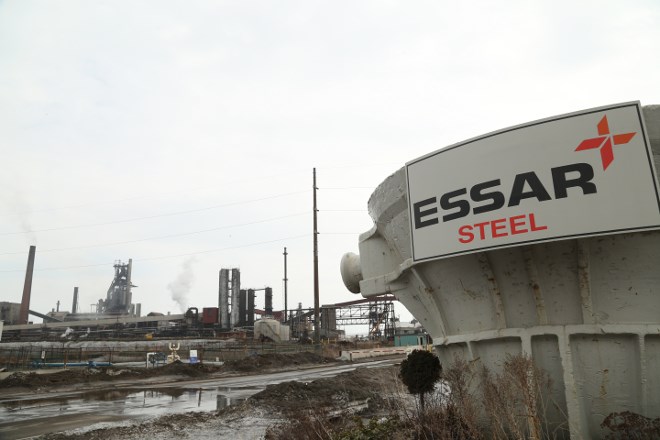 The head of Noront Resources wants to see how the restructuring process at Essar Steel Algoma shakes out before deciding whether or not to drop Sault Ste. Marie as a location for a Ring of Fire ferrochrome smelter.

The Sault is one of four Northern Ontario cities that Noront president-CEO Alan Coutts and his team are considering for a furnace operation to process chromite into ferrochrome, which is used in stainless steel manufacturing.

The mining company had hoped to make an announcement by the end of this summer, but the ongoing CCAA process (Companies' Creditors Arrangement Act) with the Sault steelmaker is dragging out Noront’s decision.

“There is some complexity around the CCAA process in the Sault and we’d like to really understand that and see some outcomes before committing or dismissing that site,” said Coutts.

The company hasn’t given any indication which city they’re leaning toward but if it’s the Sault, the port lands west of Essar Steel Algoma is the likely landing spot.

Unfortunately, the Port of Algoma, a subsidiary of Essar Global Holdings, is tied to the complicated and lengthy restructuring proceedings which may be resolved this fall.

But with the ownership situation at Essar Steel still unresolved, Noront is holding off on making an announcement.

Coutts said they’re further examining some of the environmental factors in their site selection model based on the proposals put forward by the cities, and their proximity to populated areas.

“Some of the proposals are very close to the communities themselves and we’ve done another level of modelling to really understand how close we can be to the communities and still be able to manage emissions to the high standards that are expected.”

Outside of the Sault port lands, the former Moose Mountain Mine site north of Sudbury, the Kidd Metallurgical site in Timmins, and the Grand Trunk Railway property on the Fort William reserve are also under consideration.

But other brownfield properties in those respective cities may be in play.

Noront’s corporate presentation outlines a multiple furnace operation requiring 100 to 130 megawatts of power that could be expanded once the company brings more of its Ring of Fire chromite deposits into production. The waste byproducts from the smelter would be greenhouse gases and slag.

Coutts said they would like to have the CCAA process and their site modelling wrapped up as soon as possible but it will likely take a few months more.

He couldn’t put a date on when a location will be announced.

“I was hoping to announce it already. I think we’ll announce it later in the fall sometime, I’m not sure. It depends on those two outcomes.”

It will more than five years before chromite starts moving out of the Ring.

The Wynne government announced on Aug. 21 that it has reached road agreements with three of the five First Nation communities closest to the remote mineral deposits.

Construction of an east-west road to the Ring of Fire is expected to start in 2019, along with the first leg of a north-south corridor.

Noront’s mine development plan is to bring its Eagle’s Nest nickel-copper deposit into production first – with the smelting done in Sudbury – followed closely on its heels by the Blackbird chromite deposit.

Coutt estimates they have a five-year window to raising the financing and start construction at Eagle’s Nest before commercial mining starts.