For the denizens of Manitoulin Island, who flock to the popular vacation spot when the warm weather hits, summer is filled with sun, lakes, barbecues — and now, a homegrown beer.
Jul 30, 2015 2:40 PM By: Lindsay Kelly 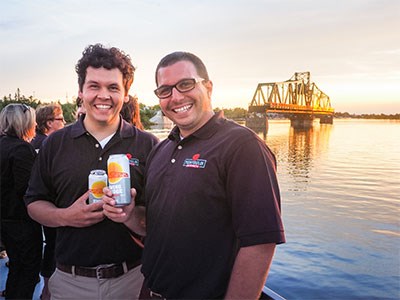 Nishin Meawasige (left) and Blair Hagman have launched Swingbridge Ale, the first brew out of Manitoulin Brewing Company, based in Little Current.

For the denizens of Manitoulin Island, who flock to the popular vacation spot when the warm weather hits, summer is filled with sun, lakes, barbecues — and now, a homegrown beer.

In June, Manitoulin Brewing Company (MBC) launched its signature brew, Swingbridge Ale, joining the growing number of independent craft brewers popping up across the province. Reviews for the easy-drinking beer have been effusive, with more than 21 restaurants and bars in the region now offering it on the menu.

The venture began two and a half years ago, when the pair, friends dating back to high school, reconnected while attending the Hillside Music Festival in Guelph where the craft beer flowed freely.

“We just had this idea: ‘You know, it would be so cool to actually start a brewery,’” Hagman recalled.

But neither had brewed a day in their lives.

Their research began, supplemented by helpful advice from other craft brewers around the province, and the pair test-brewed various recipes in Hagman’s garage for two years before coming up with Swingbridge Ale, named for the iconic span that connects the mainland to Manitoulin at Little Current.

MBC now employs Mark Lewis as its brewmaster, but the company’s big break came while the friends were attending the Ontario Craft Brewers Conference, where they met an enthusiast who would become an important investor.

Swingbridge Ale is quintessentially Manitoulin, from the bridge depicted on the cans to the hawberry embedded in MBC’s logo. (A bush grown on Manitoulin, the hawberry gives its name to Manitoulin-born residents playfully called “haweaters.”) The tap handles were fashioned from steel and ash by ironworker Kathryn Corbiere, who hails from the Manitoulin First Nation of M’Chigeeng.

Now, Manitoulin Brewing Company’s retail outlet, strategically located in Little Current along Highway 6, is poised to open by the fall. From there, they will aim to produce 60 hectolitres (6,000 litres or 1,585 gallons) of beer every two weeks, and package and distribute their product.

Hagman estimates the company will need to hire an additional eight people to run the operation. The company plans to launch additional varieties in the fall.

Hagman and Meawasige also have applications in to the Beer Store and the LCBO to stock their shelves with Swingbridge. Hagman believes that will be the key to their product’s longevity: people will continue to enjoy Swingbridge Ale all year if they can bring it home with them even after the summer wanes.

“I can’t wait for that to happen so people can share it at home,” Hagman said. “Everybody’s excited and wants the brewery to open because it’s creating jobs and creating a big hype on Manitoulin lsland, knowing they’re going to have their own beer right here, a beer they can call their own.”

Swingbridge has initially been distributed along the North Shore, from Sudbury to Sault Ste. Marie, and eventually, Hagman said, the company hopes to expand east and south, toward North Bay, Parry Sound and Toronto.

Craft beer, it would seem, is popping up everywhere these days, but Hagman doesn’t believe it will reach a saturation point any time soon.

In 2014, the big beer manufacturers owned or controlled 83 per cent of the market share, while craft beers made up the remaining 17 per cent, he noted. Hagman sees that as a huge untapped opportunity.

“People are starting to realize that there are different flavours of beer, and a good beer doesn’t have to come from the big brands,” Hagman said. “I think people are just curious to try new beers and try beers from new places, and I don’t see it’s going to change now.”