Transportation Ministry has selected a through truss swing bridge as its preferred choice
Mar 30, 2021 1:00 PM By: Northern Ontario Business Staff 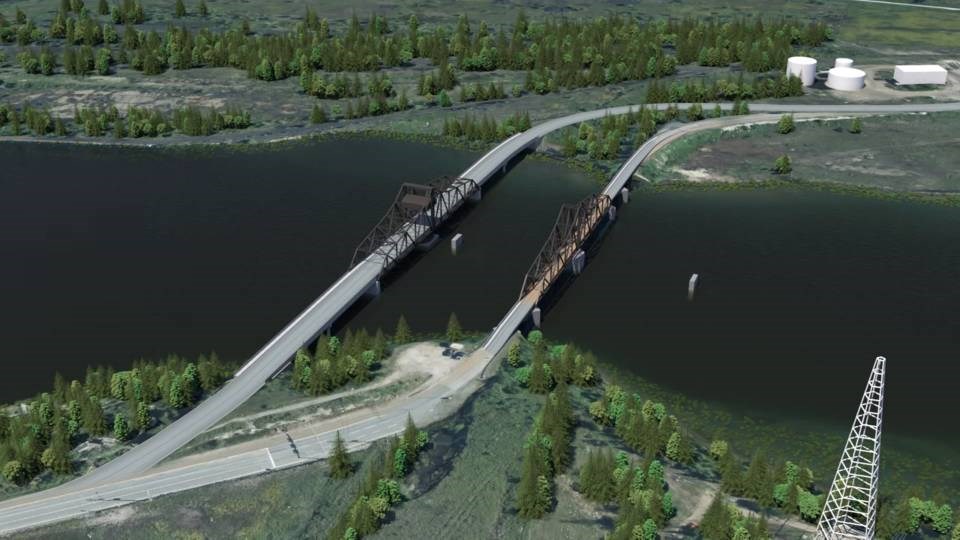 A rendering shows what the new bridge (left) will look like once it replaces the existing structure (right), which will eventually be removed.Stantec image

After years of study and public consultation, the Ministry of Transportation (MTO) has announced its preferred choice to replace an aging swing bridge that connects Manitoulin Island to the mainland of Ontario.

Posting its decision at the study website on March 30, the MTO revealed its favoured option is a through truss swing bridge – the same type of bridge that’s currently in place.

The existing, single-lane swing bridge, which will turn 108 years old this year, runs along Highway 6 and is the only year-round link between the mainland and the island situated in the upper end of Lake Huron’s Georgian Bay.

Though revered for its aesthetics and its heritage, as the bridge has aged, its maintenance requirements have become frequent and costly, and the MTO identified in 2017 that it would eventually need replacing.

Engineering consulting firm Stantec completed the $2.5-million study into the planning, preliminary design and environmental assessment (EA) process of the bridge, and the MTO has been gathering and incorporating public input through the process.

According to the MTO’s proposed plan, the new bridge will run along a newly identified corridor, located west of the existing bridge, and will be built with two lanes and a sidewalk along the west side.

New connections from the bridge to Highway 6 will have to be built, as will new traffic-queueing areas for when the bridge is closed to vehicles. The bridge swings open every hour for roughly 15 minutes to allow marine traffic to pass through the North Channel underneath.

Once the new bridge is operational, the old bridge would be removed.

The ministry chose the through truss swing bridge design after whittling down a list of 67 replacement options, which, in the early stages, included a ferry, a tunnel, and a fixed span.

Ultimately, the MTO chose the through truss swing bridge because it's expected to improve traffic operations, have a lower cost of construction, and offer the least impacts to the existing roadway network, wildlife habitat, and local residents and businesses.

Now that a replacement option has been chosen, the MTO will take in public feedback before confirming the final plan for the project.

Next, a Transportation Environmental Study Report will be prepared and become available for a 30-day review period.

There has been no indication when construction would get underway, although in the past, the MTO has suggested the swing bridge replacement project might not take place for a decade or more.