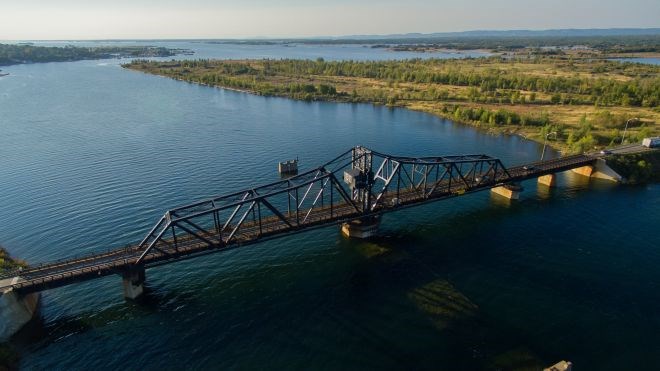 The swing bridge that connects Manitoulin Island to the mainland of Ontario will turn 105 years old in 2018, but it’s showing its age, and so the Ministry of Transportation has commissioned a study to look at alternatives. (MTO photo)

Gordan Rennie concedes most infrastructure projects undertaken by the Ministry of Transportation (MTO) don’t usually garner as much public attention as the swing bridge that connects Manitoulin Island to the mainland of Ontario.

But, then again, the swing bridge is no ordinary structure.

At 104 years old, the venerable steel span is an iconic landmark for both residents and visitors travelling Highway 6 to and from the island situated at the upper end of Lake Huron’s Georgian Bay. It’s the only permanent link between the two land masses, and so its longevity is not only a question of nostalgia, but one of access and safety.

Last spring, the ministry declared the bridge to be nearing the end of its service life and shortly after issued a request for proposals seeking a firm to undertake a planning, preliminary design and environmental assessment (EA) process.

In March, engineering consulting firm Stantec was announced as the successful bidder on the $2.5-million contract and by early spring had just begun to get its team together in advance of starting the work.

“We know there's a lot of interest in the project,” said Rennie, the ministry’s regional issues and media advisor for the Northeast region. “We expect there'll be a lot of comments and a lot of public information meetings and also consultations with municipalities and First Nations on the island.”

Algoma Eastern Railway began construction of the 368-foot, single-lane bridge – originally designed solely for rail traffic – over the North Channel in 1912. Trains starting making their first trips across in October, 1913.

By 1946, the bridge was modified to allow both rail and vehicular traffic, but by the 1980s, rail traffic ceased altogether.

Today, the bridge defaults to the closed position, but opens for 15 minutes on the hour, from April 1 to Nov. 1, to allow marine traffic through. The bridge remains closed during the winter months.

Since taking over ownership of the bridge in 1983, the MTO has performed fairly regular maintenance on the span to extend its life. Starting in about 1999, the ministry has spent millions to upgrade the bridge’s mechanical and electrical systems, refurbish its concrete pier, and replace the deck and riding surface. In 2011, the bridge even got a new paint job.

But, as with any aging piece of machinery, mechanical problems still crop up. Just last summer, travellers faced delays when the MTO took two weeks to fix a broken wedge assembly – part of the mechanism that supports the bridge when it’s closed – and operators were forced to manually jack up the wedge upon each closing.

“(The bridge) has been serving its purpose, and we have done work over the last 15 years to try to modernize some of the controls and get it in a good condition, but it’s something that’s starting to show its age in the sense that parts are wearing out, and it’s a unique structure,” Rennie said.

“It’s not like you can just order a part off the shelf – everything’s custom.”

Expected to take at least two years, Stantec’s assessment will examine the bridge’s current conditions and the full spectrum of possibilities to address its deficiencies, taking into consideration things like its environmental impact and the structure’s cultural significance – the bridge has been placed on the Ontario Heritage Bridge list.

Rennie said at this point, nothing is off the table.

“Is there something that can be done with the bridge? Is it a new bridge? Is it another way to cross?” Rennie mused. “All of those things will be evaluated through the environmental assessment and through consultation with the public and with our field investigations.”

Once work gets underway, Rennie said a project website will be set up, and stakeholders will start to see notices about public information centres where participants will be able to engage with the study team and provide feedback.

While it’s difficult to put an exact date on when the bridge might reach its end, Rennie said the ministry knows planning for the future needs to start now in order to continue with uninterrupted service.

But fans of the bridge shouldn’t worry that its familiar silhouette will be disappearing from the horizon any time soon.

Following the study’s completion, the ministry will evaluate Stantec’s recommended plan and place it in a queue for funding for the detailed engineering stage. It would then, eventually, move forward to construction, Rennie said.

“So the fact that we're doing the study now doesn't mean that we need to do something necessarily in five years, per se,” Rennie said. “With our highway plans, we often do things well into the future – 15, 20 years.

“We want to be in a position where we know what the solution's going to be, so we have a good amount of time to work towards implementing it.”