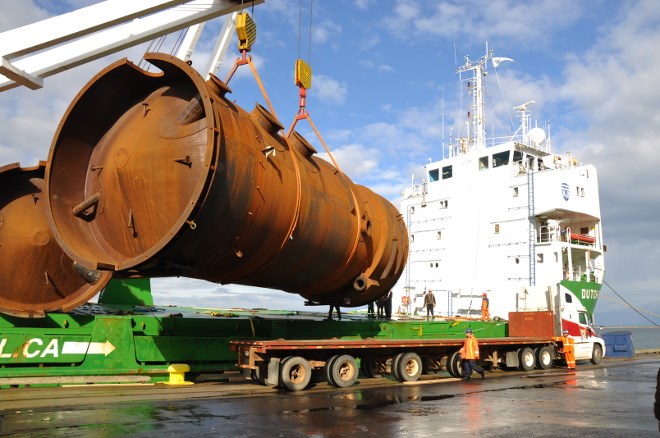 Shipments of inbound European steel remain in the freight mix for the Port of Thunder Bay early in the new shipping season.

The volume of inbound project cargoes is expected to remain strong again this year, said port authority CEO Tim Heney, with arrivals of steel beams from Luxembourg and rail from Spain, all destined for cities in Western Canada.

The historic grain port opened to navigation on March 28.

Heney said it’s difficult to pin down the number of shipments, but so far they’re looking at six on the schedule with more expected later in the year. Wind turbine cargoes will arrive toward season’s end.

Thunder Bay is known as an outbound grain port to Europe and Africa, but in recent years, the port authority’s promotional efforts have been successful in siphoning off general cargoes from other North American ports.

“Steel’s been a repeat business but most tend to be one-off projects,” said Heney. “Wind turbines can be multiple ships for the same (wind farm) project. A lot of it is selling the route through the Seaway to the West.”

That requires coordination with rail and truck carriers to convince shippers to divert freight off of other supply chains.

To better handle these cargoes, the authority invested in a mobile crane and is reconfiguring their property to create more laydown space and rail car capacity.

Construction starts this spring on a new heated 50,000-square-foot warehouse at Keefer Terminal with completion expected by next February.

It will allow the port authority to demolish an older warehouse and create more dockside space.

“We make most of our revenue from our warehousing,” said Heney. “That allows us to keep the harbour dues down and it’s our main business model that we run as a port authority.”

Warehousing has been used by the local Bombardier plant – makers of light rail and bi-level commuter coaches – and other non-marine users operating in the region.

“It’s kind of a spot warehousing business. If anything’s going on in Northern Ontario (by way of industrial development), we tend to get a piece of that.”

The idea is to create flexible and versatile space that could also house a tenant.

Heney is hopeful that having the luxury of heated warehousing might attract secondary manufacturing to town.

Despite the usual spring ice conditions in eastern Lake Superior, grain cargoes of wheat, canola and soybean were flowing smoothly through the port.

“We’ve been pretty consistent the last four or five years,” said Heney. “There are ups and downs in various commodities but it always ends up to around the same number,” shipping just under nine million tonnes annually for the last five years.

Over the winter, the port’s elevator stored 600,000 tonnes of grain from last year’s Prairie harvest, roughly half the port’s 1.2 million storage capacity.

The de-monopolization of the Canadian Wheat Board by the federal government in 2012 continues to pay dividends for Thunder Bay.

This year marks the 60th anniversary of the opening of the St. Lawrence Seaway in 1959.

Heney is pleased to see shipping companies on both sides of the border investing in faster, more fuel-efficient ships, and that funds have been authorized by the U.S. government to build a new super lock at Sault Ste. Marie, Mich.

Legislative changes are also coming to Canada’s marine pilotage system, much to the relief of shipping companies and port managers.

Federally-mandated licensed pilots were required on ships which sail in hazardous or unfamiliar waters. Shipping companies and port managers have complained for years that high pilotage rates were making the Seaway system uncompetitive for commerce.

The push will now be toward on-board training and certification for ships’ officers.

But there remain challenges, such as the need for more coast guard icebreaking capacity on the lakes to replace an aging and increasingly unreliable fleet. And port managers also want to see changes to the Canada Marine Act to make it easier for authorities to buy and sell land.