Solar Ship not yet ready to sail north 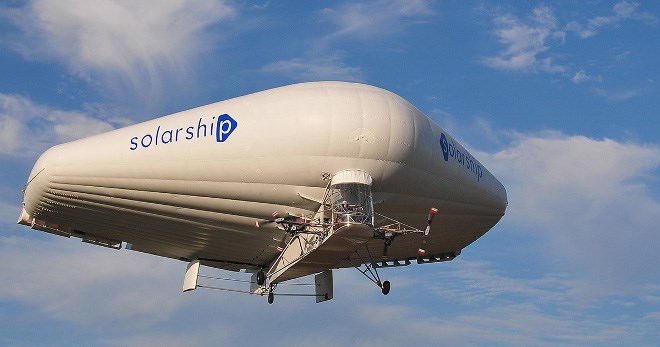 An aerial summer tour of Northern Ontario by a cutting-edge hybrid aircraft is tentatively in the cards, said the CEO of Solar Ship, but Africa remains a priority for the new age aircraft maker.

Company founder Jay Godsall said he’s awaiting the final go-ahead from the former Royal Canadian Air Force personnel on his staff before attempting a promotional cross-Canada flight in 2017 from the company’s base at the Brantford Airport to the Northwest Territories via Northern Ontario.

Since 2006, the company has been developing a blimp-like hybrid aircraft that combines a bush plane fuselage with a helium-filled overhead wing, widened to accommodate solar panels.

The company has been making inroads into Africa with a strategy to partner with business networks and freight movers on that continent to deliver relief supplies and cargo to remote communities in East and Central Africa.

Godsall wants to use Africa as a test bed and stepping stone to eventually do the same in Ontario’s and Canada’s Far North.

“As you know, there is a big difference between RCAF culture and entrepreneur culture. In the case of flying this summer to Yellowknife, the RCAF culture will win,” said Godsall in an emailed reply. “If the aircraft is given the green light to go north, it will. I’ve still got it on schedule, but they won’t put this type of flight before their primary program. That is the question right now. So we will not be promoting the idea just yet.”

The company has been developing three ships of varying sizes and payload capacities to haul cargoes ranging from emergency medical supplies to 20-foot shipping containers.

In a March 2 news release, Solar Ship announced the sale of two aerostats – which are tethered balloons with wireless information and communications technologies – to Peace + Freedom Services, a network of entrepreneurs from South Africa, Zambia, Uganda, Burundi, the Democratic Republic of the Congo, Kenya, and Tanzania.

Solar Ship said it has recruited Canadian youth from the North to work for them in setting up their logistics networks in Africa, hoping they’ll apply the lessons learned overseas to their home communities.

“The focus is becoming more intensely Africa,” said Godsall, “…bringing young, aspiring entrepreneurs and aviators from Canada’s North to Africa continues to be the immediate goal.”