City to determine if government funders still on board with expanded docks project
0
Jun 21, 2019 1:16 PM By: Northern Ontario Business Staff 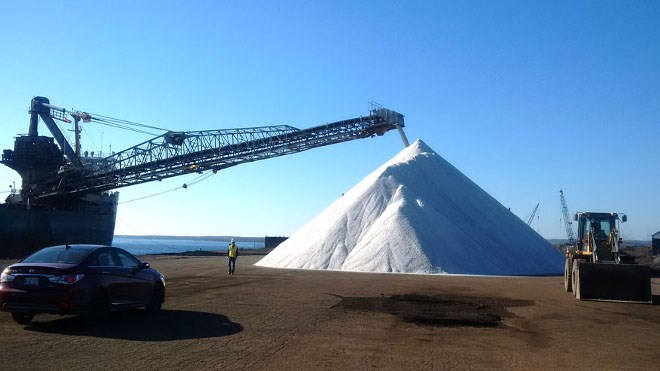 Freighter unloads salt at the Port of Algoma. (supplied)

Sault Ste. Marie’s location on the Great Lakes was instrumental in snagging a Ring of Fire ferrochrome processing plant.

Now the municipality is going back to government funders to see if once-promised money for a port study is still on the table.

Back in mid-2014, FedNor and the Northern Ontario Heritage Fund Corporation (NOHFC) agreed to each provide $2.1 million for a $5.3-million study to upgrade and enlarge Algoma Steel’s export dock area to permit outside freight opportunities.

The port project was – and remains – a priority economic development diversification project by the city.

The study would look all the infrastructure requirements, technical aspects and capital requirements for the aging docks and the accompanying 1,000 acres of industrial property.

But that work was put on hold when the steelmaker entered creditor protection in the fall of 2015 and only emerged from the process last November.

With the funding agreement with FedNor and NOHFC set to expire June 30, the city is seeking an extension to Dec.31.

In reporting to Sault council on June 17, CAO Al Horsman said there “seems to be an appetite” on the part of the funding agencies to grant the extension, but that must be confirmed.

At the same time, the city is in talks with the new owners and management at Algoma Steel on how the expanded port will take shape.

“There’s been positive dialogue but it’s very early in the process with the new owners,” said Horsman.

Noront Resources, the main mine developer in the Far North mineral belt, recently chose the Sault to be the location of its $1-billion ferrochrome facility that would process chromite ore from its James Bay mines into a semi-finished project used in the manufacturing of stainless steel.

The plant’s location near the St. Mary’s River would see significant marine traffic of inbound raw material and supplies coming over the docks and outbound product leaving for stainless steel plants in the U.S.