Shovels could be in the ground as early as 2016 to start the Port of Algoma redevelopment project, but the harbour has already attracted a new client in the interim.
Oct 22, 2015 7:59 PM By: Lindsay Kelly 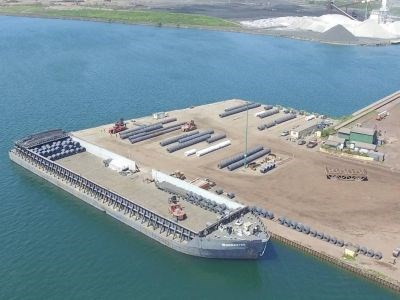 The Port of Algoma is actively seeking out new clients to draw to its facility, in addition to working on the redevelopment of its commercial docking facilities into a regional commercial port.

Shovels could be in the ground as early as 2016 to start the Port of Algoma redevelopment project, but the harbour has already attracted a new client in the interim.

Anshumali Dwivedi, CEO of the Port of Algoma, said the company is starting to see “traction on the ground” as a result of actively pursuing new business for the Sault Ste. Marie port.

“We’ve secured the first few cargos in 2015,” he said in mid-October. “Hopefully in October we’ll have the first ship coming in with aggregate cargo, so it’s bulk material coming in.”

That promises to be just the start for the facility, which is following through on a plan to open use of the port to local and regional traffic. It currently serves Essar Steel Algoma and a handful of other clients, including Tenaris Algoma Tubes, Purvis Marine and Superior Slag.

The port property covers 4.5 kilometres of waterfront and 1,000 acres of land; the company has already pinpointed 440 acres for redevelopment, which includes 1.4 kilometres of developed docks.

But the docks are aging, and in various stages of their lifecycles, and will require upgrades in order to be ready to handle additional traffic, Dwivedi said.

“Also, there was a lot of scope for mechanization and putting in modern cargo-handling equipment, which could scale up the cargo-handling capacities of these existing docks and also make them much more efficient for the user groups,” he added.

The company is now in the final stages of a $5.3-million study, expected this fall, to examine current traffic patterns and the potential industrial development opportunities that could increase port traffic.

The study was jointly funded by FedNor and NOHFC, which each put in $2.1 million; the city, which contributed $300,000; and Essar Steel Algoma, which devoted $800,000 to the study. It’s being completed by KPMG and AECOM.

Dan Hollingsworth, executive director of business development at the Sault’s Economic Development Corporation, said in addition to drawing new users to the port, the study is looking at what offshoot businesses could develop in the Sault as a result of increased port traffic.

Dwivedi said that, traditionally, once a full-fledged port facility is developed, cargo begins to flow in, and the facilities become “magnets for industrial investment.” In particular, Dwivedi believes there could be opportunities to develop more business related to forestry and aggregates in the Sault.

He envisions, for example, attracting sawmills up to the city, which could ship out semi-finished product directly from the Sault that could then breed additional spinoff companies in a multiplier effect.

Situated near the Interstate 75 and the Trans-Canada Highway and having access to rail provides the basic infrastructure, Dwivedi said. The job now will then be to work with the city to market the port to potential industries.

“If you look at where we are placed, if you go west, there’s no significant port all the way to Thunder Bay, and if you go east for almost 600 kilometres, there’s nothing of significance out there,” Dwivedi said. “So there’s a big catchment area that this project can service.”

The completed study will give the company a better idea of what long-term requirements are needed to support new traffic, including infrastructure, mechanization and railway connectivity, in addition to a final cost, which has been pegged at between $120 million to $150 million.

“We’ve not seen any significant changes in requirements or overall infrastructure costs, so broadly it should be in a similar range, but we’ll be able to put a final number behind it once that study phase is complete,” Dwivedi said.

“Hopefully, 2016 should be a good time to put shovels in the ground.”

Construction is estimated to take two to three years, and hundreds, if not thousands, of jobs will be created during that construction phase, with additional long-term employment available in the operation of the facility.

Updates are being made at the Port of Algoma website at www.algomaport.com.