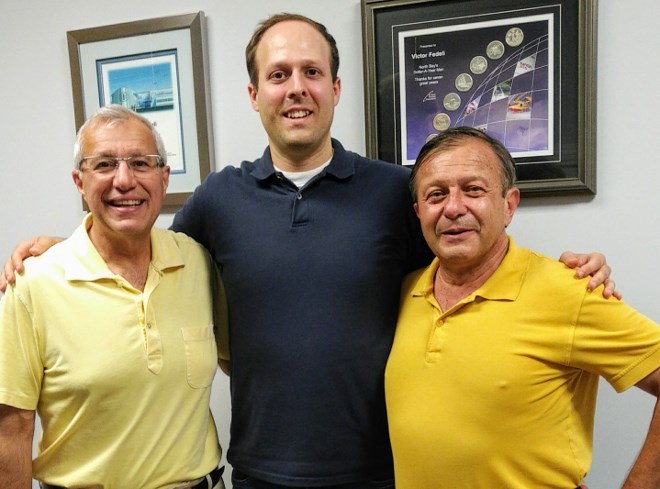 In happier times. A summer 2018 photo of a meeting of Nipissing MPP Vic Fedeli with All Aboard Northern Ontario founder Éric Boutilier and rail consultant Greg Gormick of On Track Strategies.

Nipissing MPP Vic Fedeli is going to bat for the Ontario Northland Transportation Commission (ONTC) and its stated goal of restoring passenger rail in the northeast.

The provincial Finance Minister responded to a recent story in Northern Ontario Business of the claim by rail consultant Greg Gormick that upper management within the North Bay-based Crown transportation agency did not favour a return of the train.

Gormick released a sensitive email, written to him last December by an alleged senior executive at ONTC, indicating the agency would only act to restore the train if tasked by the provincial government to do so.

The email was included in excerpts of a conceptual rail plan Gormick prepared for All Aboard Northern Ontario, a grassroots advocacy group lobbying for the return of the Cochrane-North Bay-Toronto service, cancelled by the McGuinty government in 2012.

In the opinion of the executive, the small population base north of North Bay did not justify a publicly funded rail service, adding restoration of that operation would be a 'political minefield' for Fedeli.

After Fedeli's constituency office and communications staff at Queen's Park failed to respond to requests for comment to the story, the MPP finally released a statement on June 5.

“It’s unfortunate that consultants with self-serving agendas are trying to insert themselves into this important Northern issue. We have been working on our campaign promise to return passenger rail service to the North and we continue on this mission. We're proud of the work Ontario Northland is doing to help reach this goal.

"Our government continues to support the work of the ONTC because it is such an important part of Northern Ontario’s transportation network."

In response to Gormick's charges, Ontario Northland maintains it has a new "collaboration" with its sister Crown agency in the Toronto area, Metrolinx, to begin work on a business case on the passenger train to present to the provincial government this fall.

The details of a potential new service are not known nor if it would include restoration of connections between North Bay and Cochrane.