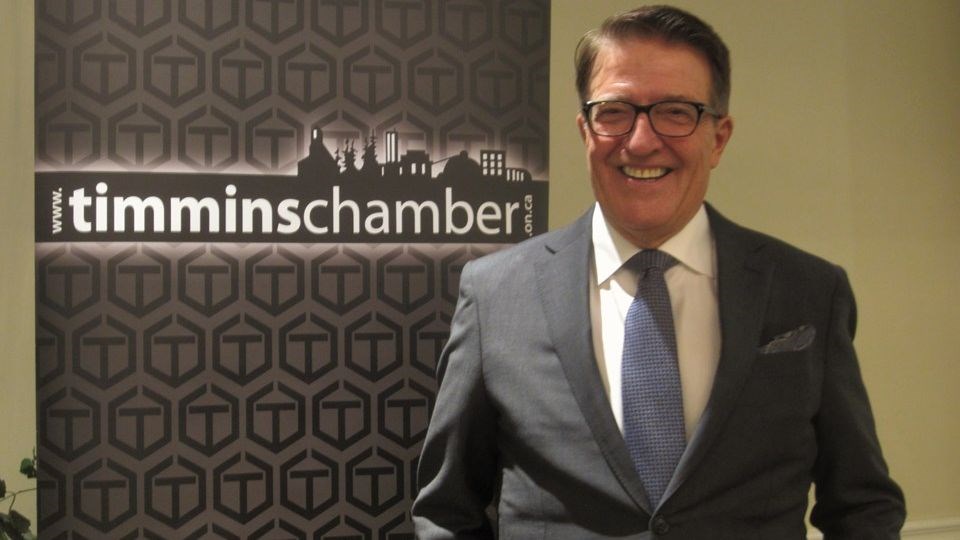 Robert Deluce, president and CEO of Porter Airlines, spoke about the company 10-year anniversary and its future expansion plans during a presentation to a Timmins Chamber of Commerce crowd on Jan. 12. Andrew Autio for TimminsToday

Porter Airlines has been a big hit in Timmins and beyond, but it remains to be seen if the company will be adding more destinations.

President and CEO Robert Deluce was in Timmins on Jan. 12  to speak about the regional airline's 10-year milestone, as well as its five-year anniversary flying out of the Victor M. Power Airport, at an event hosted by the Timmins Chamber of Commerce.

"It’s really been an exciting 10 years, and of course coming to Timmins was a major step for us,” said Deluce, who was born in nearby Chapleau.

“The current government has indicated that they don't currently support those plans. But if, and when, they potentially change their view with respect to allowing jets to operate from that airport, and us to go to some of those longer range destinations, obviously, we'll be ready, willing, and able to jump back in there and bring that about.”

In November of 2015, the federal Liberal government rejected a proposal to expand Billy Bishop Airport in downtown Toronto. In order to accommodate jet aircraft the runway would need to be extended by approximately half a kilometre. There has been plenty of vocal opposition, particularly by downtown residents, citing noise pollution and adverse effects on harbour traffic.

"The Q400 aircraft we have is a state-of-the-art, exceptionally good aircraft for short-haul regional. But to do some of the destinations that passengers have asked us to be able to fly to, including Vancouver, Calgary, Los Angeles, San Francisco, Vegas, and Miami, and places like that, then we do need an aircraft that's better suited for longer range flying,” Deluce said.

“The CS100 'whisper jet' that Bombardier has brought into service in the past year is really an ideal aircraft and a real game changer. It’s made to measure for an urban airport like Billy Bishop, and it would be equally good for a place like Timmins."

The only way that can happen is with an amendment to a tripartite agreement between the federal government, the City of Toronto, and PortsToronto. The agreement determines what kind of aircraft can be flown out of the island airport.

One area that has made major strides for Porter customers is the construction and opening of an underwater tunnel connecting the airport with mainland Toronto. The tunnel opened on July 30, 2015 and all but eliminated the need for most people to wait for a ferry boat to get to the terminal.

"The first plan was a bridge, and we almost got there. There was a contract in place, and steel on site. But the mayor that was elected at that particular time in 2003 (David Miller) chose to cancel the contract,” Deluce said.

“So we had to change gears and we introduced some modern ferries and that has served us very well. Those ferries continue today even with the pedestrian tunnel in place.”

"It makes a better overall, more reliable, and more predictable experience," Deluce added. "You can count on being able to get there, get across, and get on no matter which way you're going, and that's definitely helping in terms of converting passengers over to that airport."

Deluce said he will continue to push for the expansion, but is focused on many other aspects of improving the company in the meantime.

European, Middle East demand for Canadian wheat surges through Thunder Bay
Jul 6, 2020 3:00 PM
Comments
We welcome your feedback and encourage you to share your thoughts. We ask that you be respectful of others and their points of view, refrain from personal attacks and stay on topic. To learn about our commenting policies and how we moderate, please read our Community Guidelines.