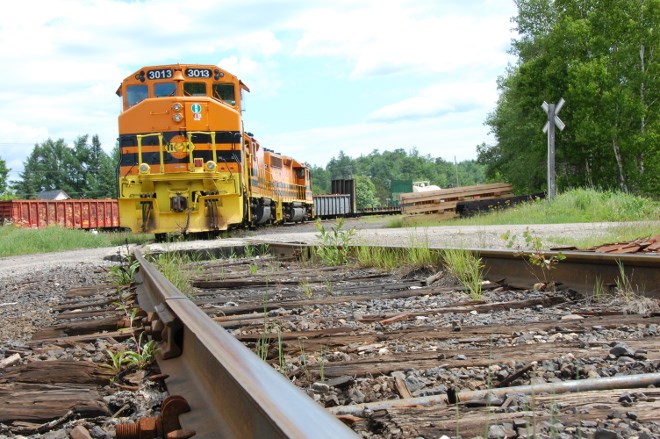 Track conditions on the Huron Central line near McKerrow in 2009. (File photo)

A Sault Ste. Marie-led task force intends to schedule a meeting with Rickford at Queen's Park within the next few weeks to make their case to keep the short-line railroad operating beyond this year.

Joe Fratesi, a task force member, updated Sault Ste. Marie council on Sept. 10 that they were unable to connect with Rickford at the Association of Municipalities of Ontario annual conference in Ottawa in August.

Rickford, who holds down multiple portfolios in Energy, Indigenous Affairs and Northern Development and Mines, had 71 meeting requests during the conference and a communications gaffe resulted in the delegation not being scheduled.

Fratesi is joined on the task force by Sault Ste. Marie city Coun.Steve Butland, and Huron Central general manager Alison Horbatuk, along with representatives from some of the 14 communities along the Sault-to-Sudbury line.

While the delegation struck out with Rickford, Fratesi said Butland and G&W president Louis Gravel met with staff from federal Transport Minister Marc Garneau’s office who seemed well-versed on the situation and left them with the impression they will find a programming fit for the company’s funding request, pending a commitment of provincial dollars.

The potential loss of the railway would put a combined 700 jobs at risk at the Domtar pulp mill in Espanola and the EACOM sawmill in Nairn Centre, the largest industrial employers in those two communities.

These companies use the line to haul in raw material and supplies, and transport finished products to market. It would also impact transportation costs at 2,500-employee Essar Steel Algoma in the Sault as that plant emerges from creditor protection this fall.

“The ask of senior levels of government is not just about the survivability of one company, it’s about the survival of communities and industry in this part of Northern Ontario that rely on the Huron Central,” said Fratesi.

Fratesi, the former CAO and mayor of the City of Sault Ste. Marie, was brought out of retirement to repeat the success of 2009-10 when the Sault took the lead in convincing Ottawa and Queen's Park to collectively put together a $33-million aid package to address deteriorating track conditions and line infrastructure.

To the critics who regard a rail subsidy as corporate welfare, Fratesi said this type of government should be regarded as wise investments, “not as handouts,” considering the 43 railway jobs at stake, the 55 service and supply jobs at 25 companies, and the future viability of industry in the region.

The volume of freight on that line is the equivalent of putting 40,000 transport trucks on Highway 17 annually.

While having political representation on the governing side at both levels of senior government works in the Sault’s favour, Fratesi cautioned “time is quickly running out.”

With three and half months to go, the company must give advance notice to its 43 employees.

From the last government funding pool, Fratesi told council in the last eight years the track has been restored to a Class 2 standard.

Freight transit times between the two anchor cities of Sault Ste. Marie and Sudbury have been reduced from 14 hours to 7.5 hours.

Besides dollars needed to upgrade level crossings, the new funding would be earmarked for new rails, ties, ballast, bridge repairs and a new mechanic shop in the Sault.

The line is owned by CP Rail, which contracts Genesee & Wyoming to feed regional freight off that line onto its main trans-Canada line at Sudbury. But CP has shown no inclination to invest in the track.

While its loss wouldn’t necessarily be a deal-breaker in the city’s bid to land a Ring of Fire ferrochrome processing plant from Noront Resources, having two major rail providers (along with CN Rail) makes the city more attractive for investment.

Both Provenzano and Butland commented that with the federal and provincial governments prepared to flow massive amounts of dollars for big ticket projects such as southern Ontario light rail, restoration of the Churchill rail line in northern Manitoba, and Ottawa’s acquisition of the Trans Mountain Pipeline in Western Canada, what they’re asking for is a relatively small investment in basic regional infrastructure.

“We, too, should share in that infrastructure money from the government,” said Butland.

Added Provenzano: “We shouldn’t have to fight for small investment in basic infrastructure in Northern Ontario, but we do, and we will.”

A news release from the Town of Espanola said the preservation of the railroad is vital to the ability of area mills to be competitive in the global marketplace, especially in a time “changing market trends and tariffs.” The two mills generate more than $600 million in economic activity in the area.

“The Town of Espanola continues to lobby the federal and provincial government to provide the support required to sustain the rail line and our industries,” said deputy mayor Bill Foster in a statement.

“The closure of the Huron Central Railway would have a devastating impact to our local and regional economies, the environment and our roads.”