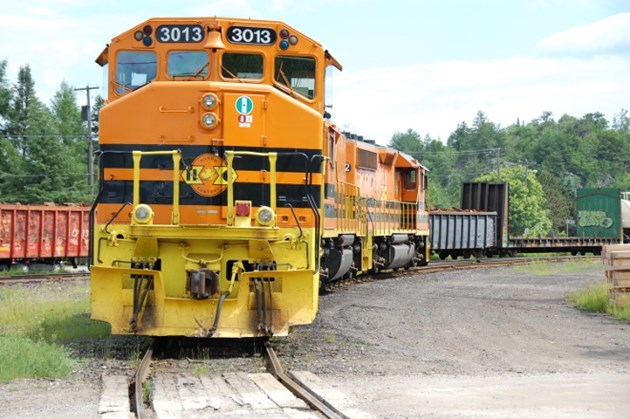 Genesee & Wyoming Canada, the parent company of the Huron Central Railway (HCRY), announced May 22 that it intends to discontinue operations on the 283-kilometre line between Sault Ste. Marie and Sudbury.

The railway, again in financial crisis mode, blames Queen’s Park and Ottawa for not coming through with subsidies for ongoing track maintenance.

The company said in a news release that its application for $23.1 million from the National Trade Corridors Fund was recently rejected by Transport Canada.

“We are obviously disappointed with this turn of events,” said Genesee & Wyoming Canada president Louis Gravel in a statement.

"We have done everything in our power to keep HCRY in operation, but both the provincial and federal governments have turned a deaf ear on the situation."

In lobbying for political support last fall, Genesee & Wyoming said it needed a combined $46.2 million over five years from the two levels of government to pay for track upkeep, repairs, and to make federally-mandated safety upgrades on infrastructure such as level crossings.

The critically important rail line services three major industrial shippers in the northeast, specifically Essar Steel Algoma in the Sault, the Domtar paper mill in Espanola, and the EACOM sawmill in Nairn Centre.

“We need the applicant to put some skin in the game,” responded Sheehan of the Montreal-headquartered railroader, “an iron-clad business plan with secured funding from private and public sources.”

The National Trade Corridors Fund is a transportation infrastructure funding pool established last July to clear freight bottlenecks in the national supply chain and improve the flow of goods and people on a cross-border basis.

According to the federal program’s funding criteria, Ottawa will provide 50 per cent of an applicant’s project costs.

Genesee & Wyoming needed to have $23.1 million in matching dollars to be eligible to apply.

The railway had had several meetings with provincial officials to secure that $23.1 million but evidently wasn’t able to secure full funding before the provincial election was called in early May.

Gravel was not available for comment but the railway did receive $882,650 in provincial funding to hold them for the year. But the company claimed it's not enough to support operations beyond the end of 2018.

Sheehan said he helped the railway meet the Nov. 6 application deadline and he was able to buy them time by encouraging them to get a letter of support from the province.

By the time the rail carrier’s application came up from review, with no provincial funds in place, federal transport minister Marc Garneau wasn’t able to approve it.

Luckily, Sheehan said, the railway can apply for funding again to access the $2.1-billion national fund.

Sheehan said Garneau agrees the Huron Central line is a “worthy” project given that it’s a vital piece of east-west transportation infrastructure that impacts communities in the northeast.

But unless the railway self-finances or secures funding from the public sector, private sources, or a combination of the two, they won’t be eligible.

“Over the next little while, Huron Central needs to look at funding options,” said Sheehan.

“They need to get their money on the table.”

No date has been set for the opening of the second round of applications, but Sheehan said that may be determined “sooner than later.”

This situation is a recurrence of 2009.

However, instead of seven months advance warning, back then Genesee & Wyoming gave industrial shippers and communities along the line only one month’s notice in threatening to drop service due to the track’s deteriorating state and declining tonnage from shippers.

It forced the City of Sault Ste. Marie, Ottawa and Queen’s Park to scramble to put together a $33-million aid package for track bed improvements, rail replacement and bridge upgrades.

The line is owned by Canadian Pacific Railway and leases the line to Genesee & Wyoming to feed regional freight onto its main line at Sudbury.

CP does not provide any money to maintain the track, leaving short-line railroaders to often defer maintenance on lines that are deemed low volume.

Genesee & Wyoming is, again, blaming declines in carloads, along with increased maintenance and government regulatory compliance costs as contributing factors for its decision.

The line’s three industrial shippers account for a combined 13,000 carloads of steel and forest products a year. But Genesee & Wyoming said that’s not enough to cover their costs to keep the line going.

"Many of our key customers rely on the railway as the only viable transportation option," said Gravel in the release.

"Closure of the railway eliminates the potential for regional economic development opportunities in the North, along with other public benefits, including reduction in pollution levels and road maintenance costs, as transport trucks will fill the gap left behind by HCRY."

So far, none of those industrial players has stated they are willing to partner to help fund the line. And there are no government programs in place that provide long-term and steady infrastructure dollars specifically for short-line railroads.

Sheehan said Queen’s Park is responsible for short-line railways and he’ll be interested to see what happens as a result of the election and any policy that might emerge.

In his many conversations, Sheehan said he encouraged Gravel to “look at creative solutions, partnerships, whatever it takes to keep this rail line going.”

A response from the Ministry of Northern Development and Mines on the status of the province’s discussions with Genesee & Wyoming – and the degree of support – was not immediately available.