The story of Sudbury’s regreening, following decades of mining, has long been a shining example of environmental recovery.
Sep 25, 2015 1:58 PM By: Lindsay Kelly 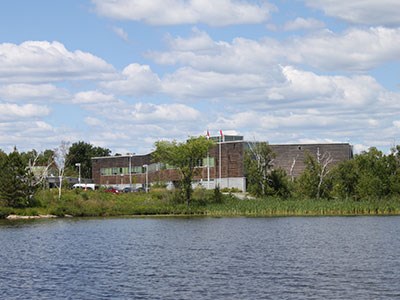 Sudbury’s Vale Living with Lakes Centre is developing an educational and promotional video designed to share the story of the city’s regreening success.

The story of Sudbury’s regreening, following decades of mining, has long been a shining example of environmental recovery. Now, the Vale Living with Lakes Centre is taking that message into the digital realm with a training and promotional video that will debut next fall.

An initiative led by research scientist Nadia Mykytczuk, the video features a series of vignettes that tell the Sudbury story from the start of the mining era, through the early days of the regreening efforts, and up to today’s advanced science research, and how all of it has helped researchers, miners and the greater community learn from the past.

Mykytczuk noted that the last compendium of the Sudbury story was the Green Book, which was compiled in 1995. But that format is now outdated, and many scientific gains have been made since then, requiring a new way for scientists to inform and engage their audience.

“We’re losing, to age and retirement, a lot of pioneers that were part of this story,” said Mykytczuk, an environmental biologist and adjunct professor at Laurentian. “Now, it’s really critical to capture that and look at how far Sudbury’s come in those four decades, but also highlight those key areas that we’re still working on.”

Despite the work that’s taken place to date, there’s much more research to be done, she said, and it has many lessons for other mining communities.

A series of learning modules is being developed alongside the video, which will be made available for use online by students around the globe. They’ll also be able to upload their data into an online, interactive database, providing comparative and international data for students, year over year, effectively making it a kind of “living repository” of data from other mining sites around the world.

The video can also be broken up into individual vignettes and adapted to different audiences, such as mining companies or community groups.

“When we took this on, we wanted to have pieces that could be pulled together for different target audiences,” Mykytczuk said. “So even though the course is designed at a fourth-year university level, we’ve done the video vignettes in a way that we can take them and they would still be accessible to the public.”

The information gleaned from the Sudbury experience is particularly important when considering new development, such as in the Ring of Fire, so that responsible mining becomes a priority rather than an afterthought, she said.

Students at the centre for a two-week Ontario Universities Field Biology Course were some of the first to preview the modules.

“I’ve always believed that community collaboration is key to the success of any environmental project, and even just two days into this course and being at the Vale Living with Lakes Centre, it’s been really eye-opening to see just how powerful that bond can be between academia and community,” he said. “Sudbury is a living testament to the results that are possible through that.”

Alex Fisher, who’s also studying ecological restoration at Trent, thinks of his area of study as “the science of hope.” He said the Sudbury story offers a lot of opportunity to inspire change in other communities.

“(Sudbury) is kind of exemplary to the rest of the world that if you can work on such a large scale, maybe all these little tiny projects that are in people’s neighbourhoods aren’t quite as difficult as one might think,” Fisher said.

But the video as a teaching tool is just one use for the product.

John Gunn, the centre’s director, believes the video can be used as a recruitment tool to attract new researchers to Sudbury.

He estimates Laurentian has the capacity to draw another 100 graduate students — studying at the Master’s and PhD levels — and believes they have the potential to create a new industry for Sudbury.

“They won’t all go into environmental science or mining, but if this was part of the strategy to recruit that age group to Sudbury, those are the future entrepreneurs for environmental sector jobs,” Gunn said. “They’re the ones that’ll settle here, get married and start companies.”

He looks back 25 years to a time when local mining stalwarts Inco (now Vale) and Falconbridge (now Glencore) were laying off miners, and pioneers like Dick DeStefano started a movement to turn Sudbury into a mining supply and services cluster. It was a success, most of those mining jobs were reimagined as jobs in mining supply and service, and the city is now one of the leading centres for mining expertise globally.

Gunn envisions doing something similar for the environmental tech area, which he believes has huge growth potential.

Mykytczuk is filming the last components of the film, which will be complete by December, and the video will be ready to debut at the Prospectors and Developers Association (PDAC) in Toronto in March.

The online course component will be available to students by September 2016.

A preview of the video is available to view here: www.youtube.com/watch?v=voDBSCRXqvo.

Laurentian University's financial crunch stems from building spree, faculty rep argues
Oct 11, 2020 12:00 PM
Comments
We welcome your feedback and encourage you to share your thoughts. We ask that you be respectful of others and their points of view, refrain from personal attacks and stay on topic. To learn about our commenting policies and how we moderate, please read our Community Guidelines.