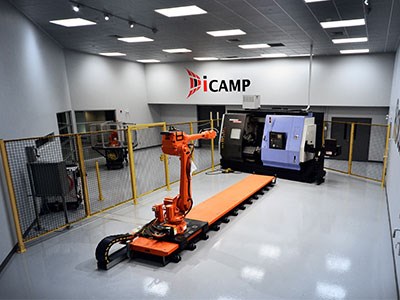 An infusion of more than $2 million will allow ICAMP, the college’s Innovation Centre for Advanced Manufacturing, to restock its tool box and make renovations at the Commerce Court campus in North Bay to accommodate a leading edge piece of technology.

State-of-the-art is often an overused marketing buzzword, but it applies in ICAMP’s case.

The industrial lab and design centre will be taking possession of a 3D metal printer to be installed later this year and ready for use by clients in early 2016.

“As much as I can find out there are less than 20 of these units in Canada,” said Evan Butler-Jones, ICAMP’s applied research lead.

Over the summer, the federal and provincial governments invested more than $1.7 million for the expansion – which Canadore is dubbing ICAMP 2.0 – with local industry partners chipping in $270,000.

ICAMP already has two existing printers that make plastic components, which are great for rapid prototyping in producing temporary parts to determine fit and form.

But the logical next step is taking 3D designs and actually manufacturing very specialized and fully functional steel, aluminum, titanium and stainless steel parts which can be used in the heavy equipment, metallurgical, aerospace, medical, and natural resource sectors.

Butler-Jones said the metal printer is perfect for companies to efficiently and inexpensively make a specific part for a customer, maybe two or three times a year, instead of designing and sending it out for casting.

“It can be done in the course of a few days as opposed to what can take months.”

To accommodate the printer – which is the size of a small CNC machine – the 8,500-square-foot environs at ICAMP have to be reconfigured this fall to handle a bigger through-put of projects.

The money also provides for some new design software and hiring of a full-time project and outreach manager – former intern Sarah Riengette – to work closely with ICAMP’s industry partners.

Since ICAMP opened its doors in 2013, all of its equipment has been selected by local industrial clients, who sit on the board of directors and corporately sponsor the various labs and meeting spaces.

ICAMP provides companies with the capacity to research new products without having to make an exorbitant investment on specific equipment. It’s also meant faster turnaround on prototype development, testing and getting commercial products to market.

“It’s about shortening the R & D cycle and taking the risk out of it,” said Butler-Jones.

“That’s a huge part of why ICAMP exists and why it’s been successful to date.”

At any time, the industrial lab and design centre has between five and 10 projects on the go for area companies.

The majority of ICAMP’s collaborations are with companies within an hour-and-a-half drive of North Bay, but word has gotten out and projects have rolled in from Timmins, northwestern Ontario, Toronto and Ottawa, said Butler-Jones.

In some cases it’s allowed local companies to quote on jobs outside the region and land sizeable orders that normally they wouldn’t have been able to.

In polling clients, the economic impact of ICAMP has been measured in the creation of 57 new manufacturing jobs by their industry partners and clients in 2014, and 16 positions retained.

“We were really overwhelmed with and happy with the response industry took to this concept,” he said. “We think it’s working very well.

“Since January, we’ve executed over 120 projects for 29 companies, and we want to keep expanding that. We think the model’s working as we see new needs from companies, new potential services and technology. We’re going to keep expanding and renewing our equipment and make sure we have the latest and best.”