Renovating buildings constructed 50 years ago always presents some surprises, but nothing during the last 12 months of Laurentian University’s campus modernization project has caused a major wrench in the plans.
Sep 23, 2015 3:07 PM By: Lindsay Kelly 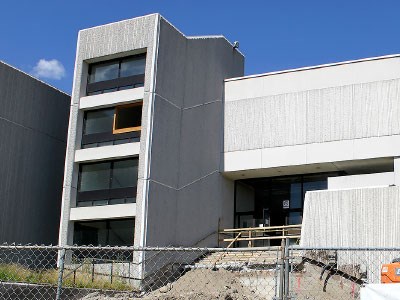 Construction on the Alphonse-Raymond building at Laurentian University was to wrap up by September. It’s a key component of the school’s multi-million-dollar campus revitalization project.

Renovating buildings constructed 50 years ago always presents some surprises, but nothing during the last 12 months of Laurentian University’s campus modernization project has caused a major wrench in the plans.

Brad Parkes, executive director of Laurentian’s facility services, said the project is on schedule and on budget, and other than addressing common issues associated with the age of the buildings, the work has gone smoothly.

Now, designers have to consider how to bridge generations of architecture to bring older design in line with modern regulations and architectural trends.

But those are the types of things that designers took into consideration — along with the school’s Campus Master Plan, completed in 2013 — when the project began in October last year. Timmins contractor Cy Rheault Construction is completing the $34-million construction phase.

The plan involves renovating classroom and lab space, the addition of a welcome and orientation area in the Parker Building, and the construction of an Indigenous Sharing and Learning Centre. The Alphonse-Raymond building will get a new student gathering space, a barrier-free entrance and food services area, while an executive learning centre will be built into the Fraser building.

Work is ongoing on several of the science buildings, and will begin this fall on the executive learning centre, university club and Indigenous learning centre. Next summer, the crew will focus on the breezeway and the Parker building.

The project has been a boon for local labourers, which make up about 75 to 80 per cent of the current workforce.

“Right now, we have 225 to 250 tradespeople on site, so it’s a big job with lots of moving parts,” Parkes said. “Really, it’s just choreographing it right now, every step and every movement.”

Parkes said keeping to the timeline is essential for reaching the project’s finish date, but with such a qualified group of workers on the job, he’s confident they will meet the deadline.

With all the construction, Parkes said detours have been set up to help people make their way through the buildings, but the school remains fully operational.

“Our registrar’s had some work to do with scheduling to make sure we’ve got enough rooms for classes,” he said.