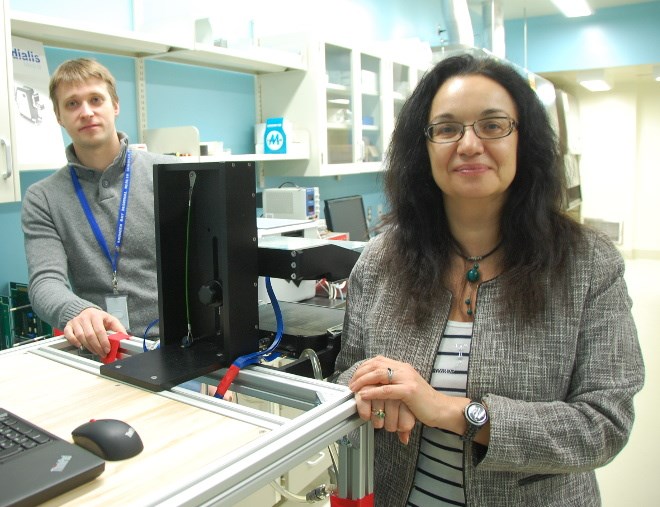 Three world-class professors at Lakehead University in Thunder Bay have been named in the latest cycle of the Canada Research Chairs Program.

Dr. Sudip Kumar Rakshit has been renewed as a Canada Research Chair in Bioenergy and Biorefining Processes for a second seven-year term.

Dr. Alla Reznik has been awarded a Tier 1 Canada Research Chair in Physics of Radiation Medical Imaging for seven years.

The Canada Research Chair is a federal program, established in 2000, to promote R & D excellence in academic research and training excellence post-secondary institutions.

There are more than 1,800 Canada Research Chairs at universities across Canada.

For the past decade, Dr. Reznik has been developing new diagnostic tools to facilitate early detection of cancer.

The ability to detect and diagnose medical conditions accurately and at the earliest stage of disease is critical for effective treatment and recovery, she said in a July 4 university news release.

“I am very pleased to receive such a high appreciation of my work from my peers,” said Dr. Reznik, an associate professor in the physics department and senior scientist at the Thunder Bay Regional Health Research Institute.

“But the most important thing for me is the opportunity to make an impact in my area of research, which I believe is one of the most humane areas of science.”

While imaging devices and technologies have vastly improved the ability to visualize body tissues and processes, they are often coupled with “off-the-shelf” general-purpose detectors that may limit their potential value for specific medical applications.

“The primary focus of my work is to design, develop and commercialize the next generation of customized detectors to improve medical imaging applications, including breast cancer screening and minimally invasive cardiac intervention,” she said.

In his second stint as a Tier 1 chair, Dr. Rakshit’s focus is on developing new technologies to produce cleaner energy and chemicals.

“The challenges of replacing fossil resources by using renewable resources in an environmentally-friendly and economically acceptable manner is crucial for sustainable development and to limit climate change,” Dr. Rakshit said.

The aim of his work is to contribute to the development of a circular bio-economy, where materials are kept within use for as long as possible. He has been developing processes to create value-added products, such as alcohol and biodiesel, and platform chemicals that can be used in several industrial sectors from renewable resources like forest wood and agricultural residues.

He believes integrating such processes into existing wood-based industries – such as in the pulp and paper sector – would make the overall industry economically viable. There looms, however, the resultant environmental problem and the impact on marine and terrestrial life.

“How do you dispose of the waste plastic after use?” Dr. Rakshit asked. “You can’t put it into the rivers or lakes.”

Making plastics from woody materials is feasible, but they must have the diverse functionality of normal plastics, including being lightweight and transparent, and they must be degradable.

“We need to make plastics which are either compostable or we can break down to their original components for re-use,” he explained. “What we’re talking about is the need to complete the circle.”

Dr. Ebrahimi has carried out her research around the world, including at the University of Toronto with Nobel Laureate Professor John Polanyi.

Her research lies at the border of chemistry and physics. It focuses on the fundamentals of low-dimensional nanomaterials whose properties are determined by their size, structure and growth dimensions.

“As a Canada Research Chair and an assistant professor at Lakehead’s Department of Chemistry, I am hoping to establish a motivating and inspiring scientific research program through which I can train young Canadian and international graduate students and researchers from different backgrounds, who might become the future human resources of science in Canada, and the world, at large,” she said.

“The knowledge that we gain through studying low-dimensional nanomaterials at atomic-to-molecular scale would help us engineer novel materials for a range of applications, for example 2D polymers for organic electronic devices used in displays, smartphones, sensors, and solar cells; porous nanopolymers for adsorbing greenhouse gases; biocompatible surfaces for nanomedicine applications, among others,” Dr. Ebrahimi said.

“All of which would contribute to the advancement of several technologies and industries in Canada.”

Dr. Andrew Dean, Lakehead’s vice-president of research and university, was pleased with the selections.

“The areas of research that are being investigated by these faculty members are essential to furthering the research priorities for the University. We thank the Canada Research Program for their continued support to Lakehead University.”