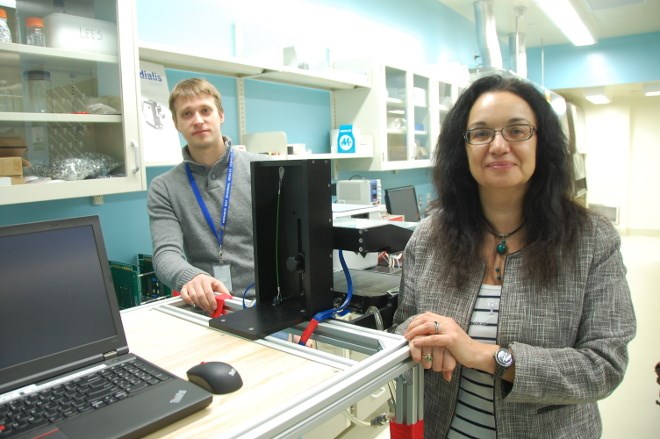 “Seeing is knowing” is not just a trite marketing line for a leading-edge breast screening device being developed in Thunder Bay, but it’s a potential lifesaver for people at high risk for cancer.

Lakehead University and the Thunder Bay Regional Health Research Institute are intent on putting the city on the map as a medical industry leader in diagnostic imaging.

After the earlier launch of XLV Diagnostics, the research institute has spun out a second company, Radialis, built around a cornerstone high-resolution positron emission (PEM) mammography technology.

PEM is an early detection device that addresses the shortcomings of the conventional mammography.

It can detect breast cancer at its earliest and most treatable stages, especially with people who are most vulnerable to the disease.

Alla Reznik, the chief scientific officer at Radialis and a Canada research chair, explained that general purpose CT machines scan the whole body. The PEM device is a smaller organ-specific device for breast screening only.

Regardless of the breast structure and density, Reznik insists, this device will find cancer.

“X-ray mammography is needed for 50 per cent of the population for whom it works. For the other 50 per cent, we need an alternative. We need molecular breast imaging. In this class of devices, this will be absolutely the best machine.”

The people they especially want to reach with this device are those at higher risk for breast cancer, especially older women with more fatty tissue, and those with a family history of breast cancer.

The PEM device will offer more detailed results in detecting aggressive forms of cancer earlier, and save the health-care system money in performing biopsies that might not be needed.

“A million and a half biopsies in North America would be avoided if better screening procedures would be available,” said Reznik.

The technology comes with two low-dose nuclear medicine detectors, which Reznik swears is “absolutely the world’s best,” and was developed by a consortium of partners in Thunder Bay.

The patent-pending detector blocks are placed on both sides of an immobilized and slightly compressed breast.

In their lab testing, they’ve detected of cancerous tumours as small as one millimetre, and that’s without using the latest software to provide a more sharper image.

Pending Health Canada and U.S. Food and Drug Administration approval, upcoming clinical trials at Toronto’s Princess Margaret Hospital and Thunder Bay later this year will provide them with actual human data. Those trials should take about a year.

Their latest prototype of PEM is a push cart-like device stored in the basement of the new Health Services Centre on Oliver Road, which houses the 28-tonne cyclotron.

A unique feature is that it’s compact enough to be easily transportable to rural and remote communities to conduct breast screening campaigns.

The final market-ready version will be 350 pounds and cheaper per unit than an expensive multi-million dollar CT or PET scan machine.

The reins of Radialis are being handed over to 28-year-old Sasha Bubon, a PhD graduate in chemistry and materials science from Ukraine.

The technology is the intellectual property of Lakehead and the research institute and is being exclusively licensed to the company. Any profits will be folded back into research.

Beyond just breast screening, Bubon said this technology could be applied to detect neurological diseases like Alzheimer’s. The detector blocks can be placed in any configuration inside a helmet.

Making the breast-to-brain transition should be easier and cheaper because the technology is not being developed from scratch, Bubon said.

“We’ve learned so much here that the transition to the brain will be way faster than it would be a couple of years ago.

"We’ve made good progress in terms of understanding what will be required and in the technological challenges.

Though it’s difficult to predict sales from this enterprise, Bubon said the device has North America-wide market appeal.

Both Reznik and Bubon believe that manufacturing medical imaging devices in Thunder Bay are one sure-fire way to diversify the economy and retain its best and brightest graduates.

During prototyping, the hardware and mechanical parts were ordered through Kam Valley and Infinity Metal Fabrication and Design.

But to get to those next stages of innovation, Reznik said they need more government funding and private sector expertise.

Andrew Dean, Lakehead University’s vice-president of research and innovation, is quite excited about what Thunder Bay can become as a world-class medical imaging technology hub.

Medical imaging is a $6.7-million sector in Canada, producing devices with a very high-profit margin because of the amount of research and development to get the technology to market.

“One of the real goals we have is here find ways to have better access and equity for rural, remote and Indigenous communities to medical therapies, and one of the ways is through technology,” he said.

With the institute, Dean said they have a core group of researchers and the basic infrastructure in place to start bringing “bench-top research” to market.

“We’re not going to be Silicon Valley, we may not be Sunnybrook, but I do think we have the potential to develop between three to 10 spinoff companies in this area within the next four to five years.”

To achieve that, they’ll need industry partners to “pull that research from the labs” and help with the marketing and commercialization aspects.

“One of my long-term goals is to have a research park that would be encompassing all different forms of commercialization and technology from forest to medical products.”

Dean said some major government grant applications in the queue to help with the strategy and to support new training in the health sciences-related fields.