FarmStart wants to get more new and young farmers into the North, and a pilot project is using training, peer mentorship and marketing to get them here.
0
Sep 25, 2015 2:05 PM By: Lindsay Kelly 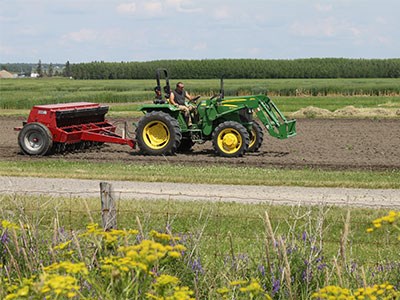 FarmStart wants to get more new and young farmers into the North, and a pilot project is using training, peer mentorship and marketing to get them here.

Allison Muckle, the owner of Rowantree Farms just outside of Sudbury, has been hired as the local co-ordinator for the Northern Ontario arm of FarmStart, which is now more than halfway into a two-and-a-half-year pilot project to test the organization’s principles in the North.

A recent provincial survey shows distinct differences in the challenges faced by farmers in southern Ontario and their Northern Ontario counterparts. For those in the south, it’s access to land and finances, whereas in the North it’s access to training and resources.

“But I think the main challenges for new farmers are finding land, being able to afford that land, and whatever capital purchases you need to start up your farm,” Muckle said. “And then beyond that, it’s where do you get that knowledge? Business knowledge as well as actual production knowledge.”

In the past, she noted, farms were passed down through generations of families, and young producers inherited the farms — as well as the knowledge required to operate them successfully — from their parents. But as young farmers have watched their parents struggle in the industry, agriculture is becoming a less attractive career option and fewer are following in those footsteps.

FarmStart aims to mitigate the growing pains by offering guidance in a number of ways, including workshops that train farmers in production skills and business management.

One workshop, Exploring Your New Farm Dream, is a four-day course that gets potential producers to consider the realities of farming before they enter the industry; at its end, participants will be able to answer the question ‘Is a farming career right for me?’

Another workshop, Digging into Farming, takes producers through the steps needed to write a business plan, recognizing gaps that may exist in knowledge or financing.

“It’s a big investment, so you want to make sure it’s something you want to do before you invest all that time and money into it,” Muckle said.

As there are also fewer opportunities for apprenticeships in the North, she said they’re also looking creatively at ways to develop a peer network for farmers to help each other. It could involve working co-operatively, or collaborating on shipping farming materials up North.

Northern producers have also formed a Northern Ontario chapter of the Ecological Farmers of Ontario, which allows for farmer-to-farmer learning through “kitchen table meetings”: farmers take turns hosting a meeting on a specific topic — tractors, for example — and peers share their knowledge, skills and experiences with their fellow producers.

“It’s kind of a fun way to do workshops,” Muckle said.

There’s also a movement for farmers to take on more marketing work and sell directly to their customers. In the past, farmers would harvest their crops, someone else would prepare the product, and a third party would sell it to customers. That’s changing.

“With people being interested in local food and knowing who their farmers are, there’s a real incentive for farmers to direct-sale their products to their customers, rather than to a middle man,” Muckle said. “But that does take more marketing skills and different types of business skills.”

Just accessing the workshops can be a challenge due to geographical distance. But with help from Contact North, attendees are able to participate via satellite locations using teleconferencing capabilities.