On the same day Apple introduced its iPad 3, Sudbury's Collège Boréal announced it will be giving all of its full-time first-year students one of the tablet computers this fall.
Apr 23, 2012 5:58 PM By: Heidi Ulrichsen 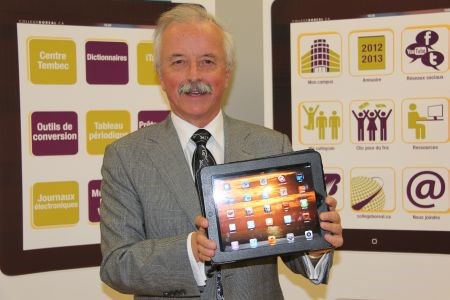 Collège Boréal president Denis Hubert-Dutrisac poses with his iPad. All full-time first-year students at the college will be given one of the tablet computers this fall

On the same day Apple introduced its iPad 3, Sudbury's Collège Boréal announced it will be giving all of its full-time first-year students one of the tablet computers this fall.

“Eventually what I'd like to see is when my students come in here in September, they open (their iPads up), and everything's there,” Boréal president Denis Hubert-Dutrisac said, after a March 7 press conference. “Their schedule is there, their finances, their email and their books.”

Hubert-Dutrisac didn't promise the prospective students they'd receive the iPad 3, which includes a high-resolution screen and the ability to connect to advanced 4G cellular networks, but said they would receive an iPad.

“Thanks to these latest techno-pedagogical tools, our students will benefit from a vast knowledge of unlimited learning opportunities,” Hubert-Dutrisac said, in a press release.

“We really want to support our future graduates in their studies by giving them a privileged access to an expanded level of resources.

“We firmly believe that by providing them with this new tool, our institution will contribute to enriching their learning experience. This is another way for Collège Boréal to prepare its students for the job market.”

For the francophone college of applied arts and technology, it will cost the school about $500,000 a year to issue iPads to roughly 1,000 students.

The money will come from Boréal's bursary fund, Hubert-Dustrisac said, adding that the college received a good deal on the hardware from Apple Canada. Students will be able to keep their iPad once they graduate, he said.

The college will be offering students free workshops next fall to help them learn to use the iPad.

“They'll give them the tool without the manual, and they can open it up and press the buttons,” he said.

“From then on, they can start working with and domesticating the tool. We'll be coaching the students as they're moving through the process.”

The iPads will be used in a number of ways.

Daniel Leduc, a manager in the college's library, said the iPad can be used to access a plethora of electronic books and articles.

“It's going to mean better and easier access for all students,” he said.

“We know libraries are going through an evolution. People are not necessarily going to the library to read books in paper format. They're now reading the book in electronic format. With the iPad, it's going to mean a better environment for the students to read.”

“That's important for all of our campuses, because a student studying in Toronto would be able to access the same resources as a student in Timmins and Kapuskasing or Sudbury.”

Rene Lapierre, co-ordinator of the college's paramedic program, said his students will be able to use their iPads as a drug guide.

He said the tablet will also be useful for them once they graduate, and they're out in the field. A lot of paramedics currently use their smart phones to find information, Lapierre said.

“As paramedics in our field, we're on the fly, we're on the go,” he said. “If there's a critical incident, we need to look up something fairly quickly, Having 10 books in the back of an ambulance is just not an option.”

Lapierre said he's “excited” the college has decided to invest in the technology.

“If we were to stand still with technology, we would fall behind,” he said. “The students would be losing out on some of the options that are out there in the electronic world.”

Hubert-Dutrisac said the college will be partnering with Cégep de Trois-Rivières and Collège Édouard-Montpetit in Quebec to share expertise regarding the tablet's educational applications.

The college has also purchased several Mac workstations which will be used by animation students to develop new apps. These apps will be focused on helping students to learn, Hubert-Dutrisac said.