Boréal students put their inventions to the test

Imagine if a machine could pour you a perfect serving of your favourite mixed drink with the press of a button.
Apr 9, 2015 6:37 PM By: Jonathan Migneault 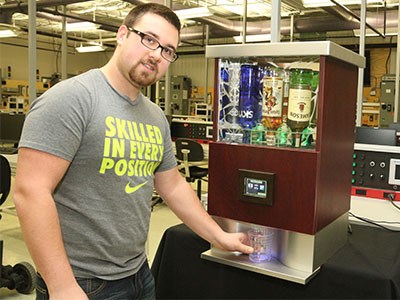 Kris Proulx, a third year electronics engineering student at Collège Boréal, made a mixed drink dispenser he calls the SelfMix for his final project in the program. Proulx's dispenser can make nine alcoholic beverages, including a vodka cranberry, ginger ale and rum, and a rye and Pepsi.

Imagine if a machine could pour you a perfect serving of your favourite mixed drink with the press of a button.

A third-year electronics engineering student at Collège Boréal in Sudbury put that idea into practice with his final project for the program.

Kris Proulx spent six months developing a mixed drink dispenser about the size of a mini fridge. He called it SelfMix.

The dispenser can support a number of bottles, all flipped upside down, that contain different liquors and drinks.

Each bottle is connected to a tubing system, and micro-controllers to release their contents in perfectly measured volumes.

The dispenser features a touch-screen on the front, and a button that says “make me a drink.”

With Proulx's prototype a person can choose one of nine drinks, including a vodka cranberry, ginger ale and rum, and a rye and Pepsi.

His invention could save bars and restaurants thousands of dollars, Proulx said.

When bartenders over-pour drinks, which can happen frequently in a bar, it can cost a busy establishment thousands of dollars in a single night.

With his machine, he said, the alcohol is always perfectly measured for the particular drink.

A commercial model, he said, could include a self-paying machine that accepts credit cards or cash, and even require the user to scan a piece of identification that proves they are the legal drinking age in their province.

“Every year I see projects that have potential to come to market,” Laurin said.

But in past years, after a student completed their final project they graduated soon thereafter, and the project was usually forgotten.

The students would move on to the workforce and never bring their inventions to market.

But for the 2015 graduates the school held a special event Feb. 25 that gave the students the chance to present their projects to their friends, family, and, most importantly, a number of industry partners.

Vale, mining engineering supplier BESTECH and instrumentation company Endress+Hauser were among the businesses at the event.

Endress+Hauser offered Proulx and electrical engineering student Patrick Gauthier jobs at their Burlington office on the strength of their presentations.

Gauthier built a kart – for people with mobility issues – that can hook up to a typical shopping cart.

He said he noticed people who already use karts or scooters to get around can struggle doing their groceries if they need more items than the vehicle can carry.

Many karts, he said, only have small baskets in the front with limited capacity.

His kart, called the K1.8, can support up to 180 lbs., and offers flexibility for grocery runs by attaching to a shopping cart.

Both Gauthier and Proulx plan to present their projects to CBC's Dragons’ Den, the popular show that lets entrepreneurs pitch their business ideas to wealthy investors.

No matter how their ideas are received, both said the six months they spent on their projects gave them a chance to think critically with only minimal help from their professors.

“We can see how much knowledge we've been given over these three years and how much information we've retained,” Proulx said.