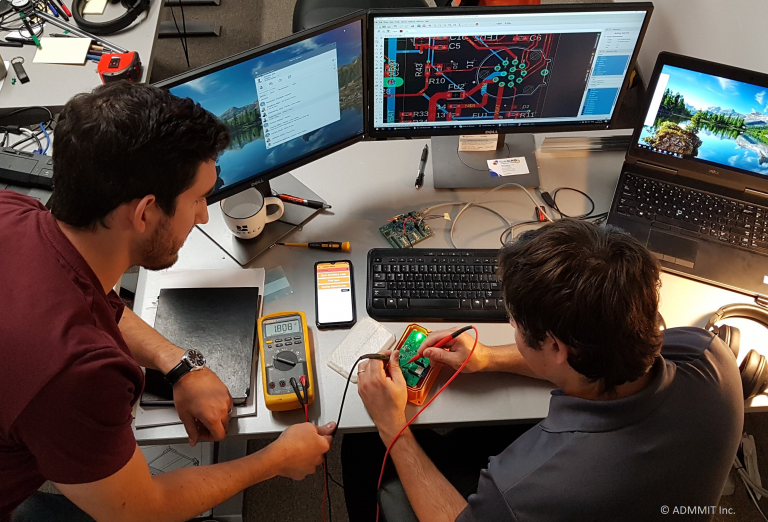 ADMMIT is a fully autonomous inventory management system that has the potential to revolutionize the mining supply chain, according to SHYFTinc president Trang Tran-Valade. (CENGN/ADMMIT)

Trang Tran-Valade is excited to usher in a future where human and robot work side by side.

The founding president of SHYFTinc, a technology spinoff of Sudbury engineering firm Bestech, unveiled an early prototype of one such robot at Cambrian College's Applied Research Day in September.

The prototype is part of the company's latest project, ADMMIT (Automated Delivery of Mine Material and Inventory Technology).

“ADMMIT is a fully autonomous, inventory management system that tracks, delivers and manages materials in real time all the way from purchase to consumption,” said Trang. “On the surface, this sounds a little bit like how Amazon delivers packages to your door.”

The difference is that SHYFTinc is using the Amazon distribution model to address supply chain issues in big mines.

Tran-Valade said Bestech first conceived of this idea back in the early 2000s, but the mining world wasn't quite ready. After running a mine logistics study during one of their projects, they discovered a need for a more streamlined approach.

But a solution like ADMMIT requires a lot of enabling infrastructure like mine digitization, a communications network, and material tracking, which just wasn't available at the time.

Now, it is becoming commonplace. Last year, SHYFTinc conducted a formal feasibility study, and it was determined that their solution now has some traction.

The mining supply chain can often be costly and inefficient.

From initial material requirements to final delivery, materials tend to get lost or misplaced. A former general manager of INCO, Alistair Ross, estimated that four per cent of mining supplies and goods are lost each year, according to Tran-Valade.

That four per cent can represent millions of dollars in a typical Sudbury mine.

ADMMIT aims to cut these costs and improve the overall efficiency of the mining supply chain. The solution is made up of three different components.

The first component is something called the SmartCube, which is essentially a big, intelligent box. The mobile storage container is designed to detect when materials are placed inside it or removed from it, and it tracks these changes in real time.

The second component is the PAC, short for payload autonomous carrier. PACs are autonomous vehicles that move materials from storage to the mine face. They can travel on their own without guidance and they can move in both open-pit and underground mines, even immediately after a blast.

These vehicles will be designed to work together, to avoid collisions, and even to boost the Wi-Fi.

Finally, ADMMIT will offer a common platform where all of the information is stored and updated instantaneously. The technology will be fully integrated, avoiding miscommunication and inaccuracy.

So far, Tran-Valade said, the response from industry partners has been “resounding.” They have clients jumping on board to help guide the final design.

The company is completing development on the SmartCube prototype right now. SHYFTinc wants to take a phased approach to introducing each component of the inventory management system, and the PACs will be rolled out next.

“We are working through each design with an agile methodology so we can fail fast and pivot,” said Tran-Valade.

They estimate that ADMMIT could save clients anywhere from $16 million to $32 million per year, and many companies are telling them this is a conservative estimate.

This technology, according to Tran-Valade, will enable seamless data-sharing in an environment that is constantly changing.

SHYFTinc is a Sudbury-based company that was launched in May 2018. The company develops digital solutions to improve the mining production process.

The company was formed to focus on the products, services, and offerings already developed by Bestech and to concentrate on research and development of new solutions.

Some of SHYFTinc's other innovations include the AutoGen IPnP, a platform solution that enables AI-assisted code authoring. This technology was introduced during the Beyond Digital Transformation mining conference in Sudbury this past February.

AI technology and autonomous vehicles are trends that seem to be on the tip of everyone's tongues lately. But there are still challenges that developers have to face before implementing this technology in the workplace.

“The idea of humans working side by side (with autonomous systems) is not something only ADMMIT will have to face,” said Tran-Valade about these challenges. “It's autonomous technologies as a whole.”

The Global Mining Guidelines Group (GMG), a legal entity of the Canadian Institute for Mining, Metallurgy and Petroleum (CIM) focused on tackling challenges that face the industry, published a study about implementing autonomous systems in mining earlier this year.

In the guidelines proposed, the GMG acknowledges that autonomous systems present new safety risks for mines and that AI technology will affect “the size and shape of the workforce.”

The way this technology will affect the industry is an ongoing discussion.

However, many industry professionals are optimistic, not only about the value added by these technologies, but also about the potential for increased safety in mines.

“It's an exciting time for technology, manufacturing and many other sectors,” said Tran-Valade. “We are seeing digital disruption like never before with new ideas changing the way we work and interface with the world.”

Sudbury, she said, is a major part of this shift.