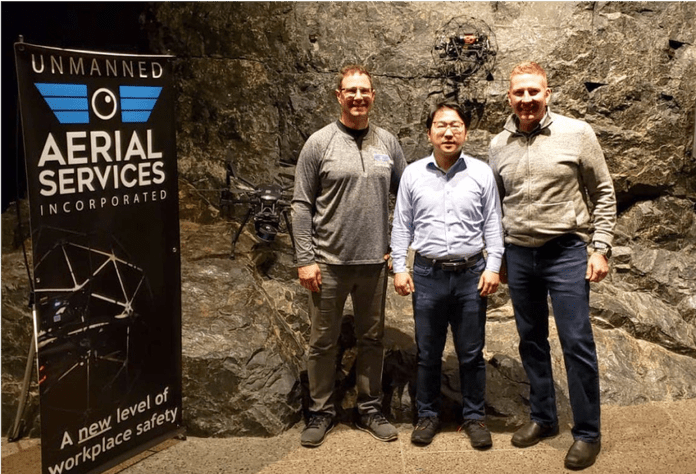 What started out as “a couple snowflakes” recently turned into an avalanche for a Sudbury-based drone company, which recently struck a deal that will assist its global expansion.

As part of the agreement, Terra Drone, a world leader in industrial drone solutions, will form a new subsidiary in Sudbury called Terra Drone Mining.

Their goal is to provide unmanned mapping and inspection services to underground mines around the world.

The new investment will give UAS the ability to penetrate other markets around the world, expanding beyond North America to areas like South/Central America, South Africa, Central Asia, Russia, and Australia.

UAS recently opened an office in Val D'Or, Que. and plans to open its next office in Montana in January 2020. In the future, the company is also aiming to set up shop in Johannesburg, South Africa and Santiago, Chile.

The company currently employs 12 people and would ultimately aim to create six to eight positions in each new office.

“Essentially, we want to do the same thing as we're doing in Sudbury, but offer that on a much wider scale to many more mine operations globally,” Mackinnon said.

UAS will also help fasttrack Terra Drone's market presence in the mining industry, and bring the Japanese company up to speed on the capabilities and limitations of using drones in underground mines.

Established in 2017, UAS is about to celebrate its three-year anniversary. Since the beginning, its focus and attention was on building trust and relationships in the mining industry.

Among the company's clients are some of the world's leading mining companies including Vale, Glencore, Newmont Goldcorp, and Barrick Gold.

While at first it wasn't sure about the agreement with Terra Drone, UAS decided to seize the opportunity.

“We were kicking butt, doing our thing,” said Mackinnon. “This will allow us to scale up into other major mining centres.”

The company currently offers two drones services: the Flyability Elios drone, which allows UAS to do physical inspections of hard-to-reach areas; and the Emesent Hovermap 3D LiDAR mapping and autonomy payload, which allows them to create high density laser scans of areas well beyond line-of-sight.

UAS also offers training, maintenance, and emergency inspection services as well as being an authorized distributor of OEM replacement parts.

Drones are becoming an increasingly popular alternative to sending workers into hazardous locations in industrial settings and underground mines.

Terra Drone Mining hopes to leverage this advanced drone technology and to lean on the know-how and reputation cultivated by UAS over time.

Terra Drone Corp. was established in 2016 and has its headquarters in Tokyo, Japan. The company employs more than 550 drone industry professionals and have more than 25 branches spread globally. The company provides drone services for oil and gas, utilities, renewables, mining, construction, and GIS sectors.

They have previously invested in companies like Unifly, which specializes in unmanned traffice management, and Ventus Geospatial, which has patented gas leak detection technology.