Three and a half years after a fire destroyed her downtown North Bay business, Jennifer Bywater still gets emotional talking about it. “I thought I was past it,” said Jennifer, her voice breaking. “But I guess not.
0
Sep 25, 2015 1:27 PM By: Lindsay Kelly 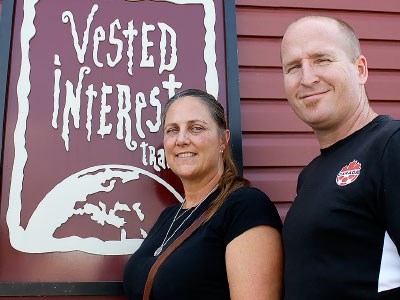 Jennifer and Brent Bywater have watched their business, Vested Interest, flourish at their new location in Callander. Their last location, in downtown North Bay, was destroyed by fire in 2012.

Three and a half years after a fire destroyed her downtown North Bay business, Jennifer Bywater still gets emotional talking about it.

“I thought I was past it,” said Jennifer, her voice breaking. “But I guess not.”

The January 2012 blaze, ignited by an electrical malfunction, gutted the 100-year-old building that housed Vested Interest, consumed all the merchandise, and effectively wiped out the business that Bywater and her husband Brent had so painstakingly built up over the previous 20 years.

Despite the heartache, the entrepreneurial spirit that drives the couple kicked in, and they vowed to get right back into business, first setting up a temporary space before moving the whole enterprise to Callander, which, ironically, was Vested Interest’s original home.

The shop, which specializes in Indonesian imported goods and gourmet and speciality foods, is now housed in a renovated warehouse, which the Bywaters moved into in June 2014.

“It’s very bright and airy and cheery,” Jennifer said. “People comment a lot that it’s just a really feel-good place. They immediately feel relaxed and want to spend time there; there are a lot of great things to look at.”

Shop space comprises the lower level and loft areas of the 9,000-square-foot space; the offices, warehouse and unloading area are located at the back of the building. The couple completed a second building, a 6,000-square-foot warehouse and manufacturing facility, across the street in early 2015. From there, they manufacture and store product from their other lines: Uprooted Designs manufactures furniture from tree roots, while Rock Solid Creations manufactures stone garden giftware.

As she has every year since Vested Interest’s inception, Jennifer travels to Indonesia for the months of September and January to meet with the artisans who manufacture specific lines for her company. She is now wholesaling her products to 2,000 stores across Canada.

“There’s a combination of some things (the artisans) are producing, but in order for us to be competitive in our wholesale market, most of the products are our own custom designs,” Jennifer said. “So we create our own lines and then have them produced over there.”

About a decade ago, the Bywaters found a new niche with gourmet and speciality foods. The food division now comprises about 80 per cent of their business. For five years running, Buckstone Inc., the wholesale arm of the company, has been invited as one of three Canadian companies recognized by the U.S. government to appear at the Fancy Food Show in New York City.

Jennifer said it’s important, as entrepreneurs, to keep up with market demands and look for opportunities where they present themselves.

There’s no question their strategy is working. After the fire, the Bywaters had an abysmal year, but by 2013, had got the business back on its feet and experienced 33 per cent growth. This year, the business is enjoying a 47 per cent growth from 2014.

“Year over year, if you compound that, it works out to being well over 100 per cent from the year after the fire,” Brent said. “The wholesale is growing and the retail is picking up very nicely.”

Manufacturing is their newest endeavour. The Bywaters currently have the exclusive Canadian distribution rights for a product called Why Flush, which eliminates odour and bacteria from toilet bowls, allowing the toilet to be used several times for urination before needing to flush.

The couple is in the final stages of securing the licensing agreement to manufacture the product, paving the way for Why Flush to be produced in their facility in Callander.

In light of the current drought in California, and the ongoing debate about conservation, Brent said the product’s arrival in Canada is prescient.

“It’s a very exciting product of the times,” he said. “It’s not a glamourous topic, but it just seems goofy to me that we flush fresh water down the toilet.”

The Bywaters said they’ll be looking to add more products to manufacture from Callander and are already working negotiating to produce a new food sweetener on the market.

They’ve hired five new people since moving to the new shop — they now employ 15 in total — and expect to need more once they secure the production rights to Why Flush.

“I think if you’re not growing, you’re dying,” Brent said. “I do feel the consumer out there is starting to be conscious of where things are coming from. Is it always the lowest price is the law, or do people care about the quality and getting value from their dollar?”

Coming back from devastation over the last three years, it was often hard for them to see a silver lining in the experience. But Bywater said the new location couldn’t have worked out better.

In addition to retaining its loyal, long-time customers, Vested Interest has tapped into a new market, becoming a destination store for tourists spending their summers in the area.

“Being an entrepreneur, we can’t help seeing opportunities,” she said.

“Opportunities are around everybody all the time. Knowing when to grab that opportunity and knowing what to do with it is part of the puzzle, and there’s no right or wrong.”