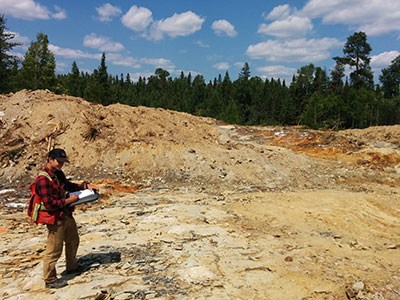 The company said the exploration committees for the Lonmin-funded joint ventures in Sudbury have approved programs totalling $3.958 million for approximately 20,000 metres of drilling and other work starting Oct. 1.

"The exploration program for 2016-2017 is exciting in that it not only follows up on this year's success at expanding the near-surface mineralization at Parkin, but also will test other exploration targets at depth" said Marz Kord, Wallbridge president-CEO, in a statement. "This exploration program will advance Wallbridge's exploration stage assets in Sudbury and complements Wallbridge's current efforts in acquiring an advanced stage gold asset, the Fenelon Mine Property, from Balmoral Resources, which the company is planning to rapidly advance to a production decision by mid-2017".

On its Parkin Properties, the North Range Joint Venture Exploration Committee has approved a 2017 scope of work and budget which includes $3.358 million to complete approximately 18,000 metres of drilling, ground and borehole geophysics, as well as studies and permitting to evaluate and be prepared for a potential bulk sample.

The 2017 programs include up to $200,000 in rebates which are expected to be received by Wallbridge in 2017 from the Junior Exploration Assistance Program sponsored by the Ontario Prospectors Association and the Northern Ontario Heritage Fund Corporation.

James Bay gold explorer raises close to $4 million in exploration financing
Apr 6, 2020 11:36 AM
Comments
We welcome your feedback and encourage you to share your thoughts on this story. We ask that you be respectful of others and their points of view, refrain from personal attacks and stay on topic. To learn about our commenting policies and how we moderate, please read our Community Guidelines.