Innovator Jim Kendall remembers the exact circumstances surrounding his eureka moment: Jan. 19, 2011 at 6:50 p.m., while on the elliptical trainer at the Ajax Community Centre.
Feb 18, 2015 7:12 PM By: Lindsay Kelly 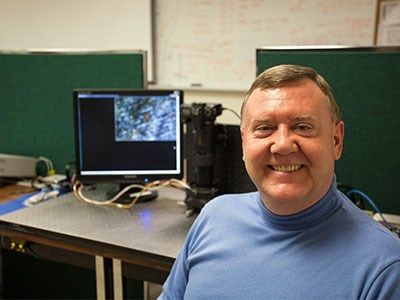 Jim Kendall is pictured with the Gold Sniffer, a product he developed that takes high-resolution pictures of mineral samples, indicating the shape, size and location of gold particles in a mineral sample.

Innovator Jim Kendall remembers the exact circumstances surrounding his eureka moment: Jan. 19, 2011 at 6:50 p.m., while on the elliptical trainer at the Ajax Community Centre. It was then the mining engineer alighted on an idea that some believe could be a game-changer for the mineral exploration industry.

Kendall, who holds four engineering degrees, was working for a large gold mining company at the time, and his job was to come up with new technologies for mineral exploration. The lag time waiting for drill core results to return from an assay lab was far too long, costing the company time and money, he reasoned.

There had to be a quicker, easier way.

“I had been thinking about this idea,” Kendall said. “I had the physics worked out, but I didn’t know physically how to do it.”

Over the course of a day, he had figured out the details, and that was the genesis of the Gold Sniffer.

The product uses similar technology to that of a digital camera. Using a special sensor and high-powered macro lens, the Gold Sniffer takes high-resolution pictures of the mineral surface. Based on the colours that show up in the images, an operator can see micron-sized gold particles, determining their shape, size and location, as well as the minerals associated with the gold. By averaging over several pictures, the Gold Sniffer can provide an estimate of the gold grade in the mineral sample.

The keys, Kendall said, are the method to detect gold in the digital picture and the specialized LED light source, both of which have taken him and his research team years to develop.

Employing the Gold Sniffer in the field could increase efficiency and profitability in mineral exploration and gold mining, Kendall said, because it’s small and portable, which means prospectors could take it to the rock face and get an estimate of gold grades during drilling.

“If you have the Gold Sniffer set up there, a geologist can measure and see if there’s gold and what’s coming out of the ground,” he said. “If there is (gold), you keep going, and if there’s not, you stop, because at $100 a metre, you’d better know when to stop.”

He’s been working with Conestoga College in Kitchener, and the earth sciences department at Laurentian University in Sudbury to refine the technology. A successful bid to the Natural Sciences and Engineering Research Council of Canada netted Kendall a $515,000 grant to fund the work.

Kendall has most recently connected with the Innovation Mill at NORCAT in Sudbury, which has paired him with a mentor to help him bring his product to commercialization. Jeff Fuller, of Fuller Industrial, said the Innovation Mill formalizes the mentorship process by bringing together a group of professionals that collectively has a good cross-section of skills and knowledge to offer mentees.

Fuller checks in with Kendall every few months to ensure the Gold Sniffer stays on track to commercialization. At this stage, Kendall has to validate the market, determining the size of the market and the Gold Sniffer’s early adopters, Fuller said.

“He certainly knows the science and he’s passionate about it, and those are some of the key elements that anyone needs to be successful, so I think he’s doing all the right things,” Fuller said.

Yet Kendall’s mining acuity isn’t just a product of his education — you could say it’s embedded in his DNA.

Grandparents from both sides of his family emigrated from Lancashire, England, in 1910, drawn by the lure of the Cobalt silver rush. His father’s family settled in Sault Ste. Marie, where his great-grandfather was the first foreman of the machine shop at Algoma Steel, while his mother’s family set down roots in Cobalt. Kendall grew up in southern Ontario, but spent his summers on the shores of Gillies Lake, just south of Cobalt, where his family still owns patented mining claims dating back to the 1920s and 1930s.

“There’s drill core lying around the house and the Northern Miner Magazine gets delivered to the front door like it’s the evening newspaper,” Kendall chuckled.
Now he’s adding his own chapter to his family’s mining legacy. Because research and product development were done simultaneously, Kendall believes he can reduce the time it takes to get the Gold Sniffer to market by 50 per cent. He’s aiming to have a commercial product ready within six months.

“It’s very complex technology; it’s taken years to develop,” Kendall said, noting a mining company has offered its property to conduct field trials. “We’re getting close. We’ll be looking to do field trials within the next few months.”

Once at the commercial stage, manufacturing would likely take place in Kitchener-Waterloo, with the potential for setting up an offshoot location in Sudbury. Kendall said there will also be opportunities to hire on Laurentian grads.

“Essentially, we’re trying to marry together the high-tech manufacturing in Kitchener-Waterloo with the mining, mineral expertise of Sudbury—that’s really what’s going on here,” he said.