The last year was difficult for mining exploration companies, but it was an improvement over 2013, says Scott McLean, president and CEO of Sudbury-based Transition Metals.
Nov 13, 2014 3:44 PM By: Jonathan Migneault 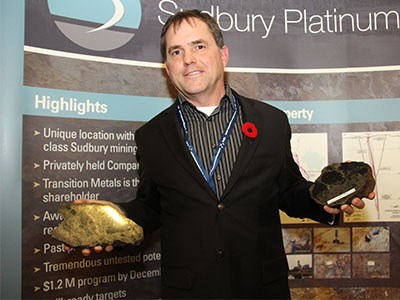 Transition Metals president and CEO Scott McLean shows off some rock samples from the company's Aer-Kidd site, just south of Sudbury. McLean presented at the 2014 Ontario Prospectors Association Exploration and Geoscience Symposium where he updated mining industry insiders on his company's progress.

The last year was difficult for mining exploration companies, but it was an improvement over 2013, says Scott McLean, president and CEO of Sudbury-based Transition Metals.

“2015, I expect, is going to be better than 2014,” McLean said at the 2014 Ontario Prospectors Association Exploration and Geoscience Symposium. “But realistically speaking, I think we're a ways out from the good traction in the mining equity markets.”

McLean went on to say the mining sector's current down-cycle is the worst he has experienced since he started his career in 1985.

But with every bust comes a boom, he said, and he expects the rebound to also be the biggest in his career.

To prepare for that rebound, Transition Metals has taken on a more ambitious portfolio of properties than most junior miners.
McLean calls the company a “project generator,” because instead of exploring just a few properties, it has 24 across Canada, and one in the United States.

“Generally speaking, it is a pretty niche part of the market,” he said. “Right now is a time when companies are desperate for cash and are forced into raising money at very poor valuations. We don't have to do that.”

One of Transition Metals' most promising properties, he said, is its Aer-Kidd project in the Sudbury basin.

The project is located around 20 km southwest of Sudbury along the Worthington Offset Dyke.

Vale's recently re-opened Totten Mine is just southwest of the property, while KGHM's Victoria Mine, which is due to begin production in 2019, is northeast of the site.

Geologists first discovered mineralization on the Aer-Kidd property in the late 1880s, and near-surface mining occurred there periodically from 1916 to 1968.

A Transition Metals subsidiary called Sudbury Platinum owns the mining rights for the property, and the company believes it has an “excellent potential” to host significant nickel, copper and platinum group metal deposits comparable to Vale and KGHM's neighbouring mines.

The company has committed to an initial $1.2 million to explore the site's mineral potential.

With other properties that have similar potential, in the Abitibi region of Northern Ontario, and in Saskatchewan, for example, McLean said he is confident at least one site could be a good candidate for development in the near future.

“I'm very confident that we have great projects,” he said. “In fact, I would say AER-Kidd is probably one of the better exploration projects around.”