Barring a last-minute settlement, a Sudbury junior mining company expects to be in a Toronto courtroom in early October to take on the Ontario government in a potential landmark case that could prompt revisions to Ontario’s Mining Act concerning Firs
Sep 17, 2015 6:13 PM By: Ian Ross 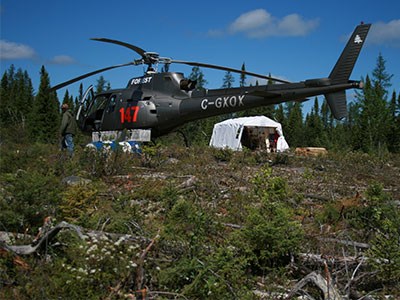 Northern Superior Resources claims the province neglect in consulting with First Nations in northwestern Ontario caused them to terminate exploration and abandon work its mining claims.

Barring a last-minute settlement, a Sudbury junior mining company expects to be in a Toronto courtroom in early October to take on the Ontario government in a potential landmark case that could prompt revisions to Ontario’s Mining Act concerning First Nation consultation.

“I’d rather be talking about exploration,” lamented Tom Morris, president and CEO of Northern Superior Resources, who was making preparations for a four-week trial in an Ontario Superior Court starting Oct. 5.

Northern Superior is seeking compensation from the province for failing to protect its interests in a gold exploration play in northwestern Ontario that the company was forced to abandon its mining claims after a series of disputes with a First Nation community in 2011.

Close to two years ago, Northern Superior filed a $110-million lawsuit in late 2013 to recover the $15 million it spent on exploration since 2006, plus the estimated future value of the three properties on Crown land as they worked toward a major gold discovery near the Manitoba border.

The company has since dropped that figure to $25 million in an effort to reach a settlement with the province through mediation, but to no avail.

The two parties’ legal teams are scheduled to meet for one final time during a pre-trial conference on Sept. 17.

“It’s been a long process and we’re relieved we’re at a point where decisions are going to start being made,” said Morris. “We’re feeling very confident going in and I’m curious to see it’s going to unfold.”

In one instance outlined in court documents, the company claims Sachigo Lake First Nation demanded close to a quarter of its exploration budget – about $1.2 million – for its 2012 drill campaign, calling it an “administration fee.”

When the company refused to give in, the First Nation served them with an “eviction” notice, forcing them to stop exploration work and leave the area.

The company blames the Ontario government for its alleged inaction in carrying out its duty to consult with First Nations.

The province responded that it’s not liable for any damages incurred by the company, adding that the decision to stop exploration was theirs alone. The government further contends it’s not responsible for any demands made on the company by the First Nations, or the company’s decision to reject them.

Morris categorizes the chances of striking a pre-trial deal with the province as a “low,” but suspects anything can happen given the gravity of the case.

“I’ve been told often what happens is that these things get settled on the steps of the court house or very early in the trial once a group gets a sense of which way the wind’s blowing.”

Should the decision go in Northern Superior’s favour, Morris expects regulatory changes in the Miniing Act, particularly the way government delegates its legal duty to consult with First Nations over to industry.

“There will be changes in law if this goes to trial and Northern Superior wins,” said Morris. “It will have a direct effect on how business is done in this province.”

The province’s exploration community will be glued to the outcome of the trial.

“We’re definitely concerned about which way it goes,” said Garry Clark, executive director of the Ontario Prospectors Association. “It could be something that actually moves the yard sticks and cleans up some of the issues people have. Though it could be dragged out (in litigation) a cause a bit more grief in the fact that there’s no decision.”

Despite a plans and permits consultation protocol in the Mining Act, Clark said there still remains a lack of understanding by all the parties – industry, First Nations and government on what each party ‘s function is.

As a junior miner struggling to raise funds in a down market, Morris said the decision to go to court was not made easily.

With the company’s stock price hovering at two cents a share and 200 million shares outstanding, Morris felt a fiduciary responsibility to investors to come to a resolution with the government and get on with exploration work at their other gold plays in Northern Ontario and western Quebec.

In resorting to legal action, Morris said there’s been solid support from his board of directors and shareholders at two annual general meetings.

“I don’t want to be doing this any more than anyone else does, but we really weren’t given much choice. Given the fact that there’s very positive change that can come out of this for our exploration industry, the First Nations and for Ontario generally, it’s an exercise I would do all over again if I had to under the circumstances. “

In preparing for trial, the company recently received a bundle of previously withheld government documents obtained through a Freedom of Information request, which Morris feels only further builds their case.

The company also hired NERA Economic Consulting to determine the compensation based on the value of the gold properties.

Morris declined to get into specifics of the NERA report except to say it provides a “fresh and modern approach” toward establishing valuation for exploration plays.

The traditional method, he explained, uses fair market value or an appraised evaluation in comparing properties with similar geology at the same stage of exploration, a less than reliable formula, Morris said. NERA’s method, he said, takes a “broader and more thorough way of appraising” property taking into account exploration funds spent, market trends and the company’s fall in share price.

“They’ve applied a number of different methods to their evaluation process,” said Morris.