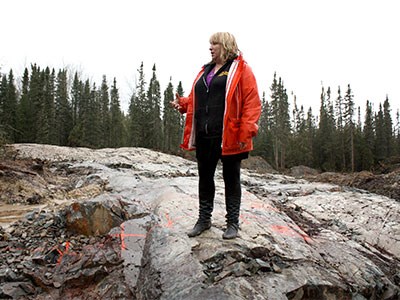 Barb Courte of Cobra Drilling and North Star Drilling said exploration activity in northwestern Ontario is drying up and she's finding better opportunities in the Caribbean.

A Thunder Bay drilling company boss said exploration work is drying up in Northern Ontario and she's finding greener pastures in the Caribbean.

Barb Courte, president of Cobra Drilling and North Star Drilling, is dispatching four drills to the Dominican Republic this fall for a project with Unigold, a Canadian junior company.

“I'm getting calls from other companies in the Dominican to do more work.”

While 2012 has been a solid year for her two companies, she has major trepidations for what lies ahead.

“I think we're going to have a very hard year ahead of us.”

A tepid investors' market means exploration budgets for junior miners' drilling programs are being slashed or the companies aren't doing anything.

And it's across the board for all commodities, gold included, she said. “Everybody's holding onto their money.”

She estimates her activity is off 50 per cent.

While there's optimism across the northwest with the possibility of as many as 13 new mines coming online over the next five years, money for exploration at the grassroots level is scarce for junior miners.

Courte said it's a money-losing proposition for her to operate in Ontario.

“We're drilling for almost nothing. I keep telling my employees we're taking small jobs for the next few weeks.

The Ministry of Northern Development and Mines expects six mines to reopen this year with eight expected to open in the next decade.

She isn't buying any rosy projections until she sees the juniors start spending again.

Courte has eight drill rigs in the northwest, but has no idea if they'll be turning in the new year.

“I don't know if it will be busy. I really don't have anything booked for January.

“I have three working in Dubreuilville (for Prodigy Gold). When that finishes, I don't know what's in store.”

At her peak in 2011, Courte employed 70, but with layoffs, is down to 30 employees for both companies. About one third are Aboriginals who started as helpers and moved into supervisory positions.

Although some companies and the province laud Ontario as being one of the best mining-friendly jurisdictions in the world, Courte said that perception has changed.

In conversation with her industry colleagues, Ontario is considered a “risk area” for investment, based on some high-profile First Nations-industry conflicts, along with the uncertainty of how the new Mining Act plans and permits regulations will play out.

“It's the lowest numbers we've seen for drilling supplies since we've been into it for the last four years.”

Paxton stocked up in anticipation of a busy exploration season this fall, but many drillers have packed up and gone home, or haven't shown up at all.

His company has about $1 million worth of inventory that's gathering dust.

“We were pumped up for some activity, but it hasn't happened,” said Paxton.

After servicing the forest industry for decades, the company delved into drilling supplies in 2008.

A year ago, Osisko had 21 drills operating at its Hammond Reef gold projects in Atikokan and Wire Rope was supplying 12 rigs. That equipment has moved out as the company moves into the mine development phase.

But there is still work to be had in supplying mine-builders like Dumas and J.S. Redpath working on mine expansion projects.

“Our core businesss, rigging products, has gotten a little stronger. But I am worried. We're sitting on a big chunk of inventory for the diamond drillers and it's not really moving and that's scary.”

“If your stock is below five cents and you've got marginal or grassroots projects, you can't raise money.”

But he said some juniors are experiencing some success on the capital-raising front.

Ever the optimist, Clark said exploration projects are moving ahead on a weekly basis across the region's expanse and up north into the Ring of Fire.

“You have to hope this slump is a short one and there's some industry consolidation so that some of these projects can move forward.”