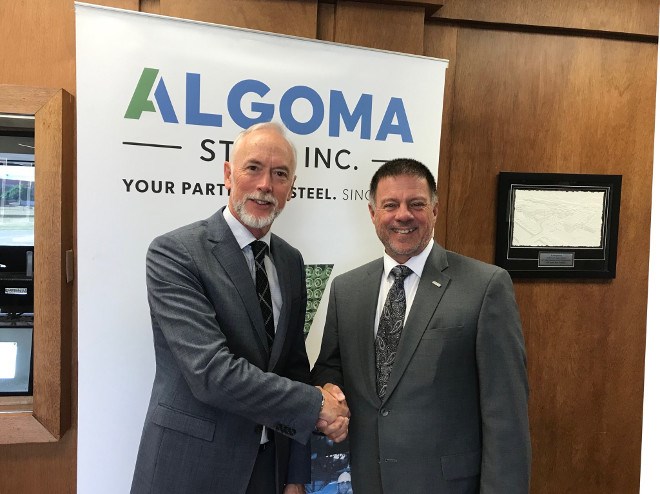 Erin Brockovich might be the most watched movie in Sault Ste. Marie these days.

When Noront Resources president Alan Coutts grabs the mic at the Delta Hotel on Oct.23 for the first of, likely, many community presentations, he’ll have to reassure residents that the Sault won’t become Hinkley, Calif., and remind them that his company’s proposed ferrochrome smelter isn’t getting built anytime soon.

“We have no interest or intention of doing anything that could potentially harm the people of Sault Ste. Marie or our (future) employees,” Coutts told Northern Ontario Business.

Five months after the Steel City was selected as the home of Noront’s proposed $1-billion processing plant, opposition began to swell after a group of physicians released a letter to local politicians suggesting there could be an exodus of medical professionals from the community if the furnace were to become reality.

Within days, university academics, environmentalists, and concerned citizens gathered in a hotel ballroom to question whether the promise of 300 to 500 plant jobs was worth the risk of public exposure to hexavalent chromium – chromium-6 – a waste byproduct of ferrochrome production and a known carcinogen.

“It’s a concern, as a physician, that we’re putting that in the midst of our city,” said Dr. Robert Suppes, an emergency room physician at Sault Area Hospital, who helped draft the letter.

In a blue-collar town where steelmaking has dominated the local economy for more than a century, Suppes said he and his colleagues “struggled” with voicing their concerns.

But Suppes said his group regularly deals with the human toll of the city’s heavy industrial landscape, given the “off the chart” cancer rates in the Sault, consistently in double digit figures higher than the provincial average, according to biannual reports from Algoma Public Health.

“The Sault is an economically depressed town, similar to a lot of communities in Northern Ontario,” said Suppes. “Industry and mining tend to go through a boom-and-bust cycle. I think the number one issue is: yes, this going to be economically positive for our town, but at what cost?”

Last May, the Sault came out the winner to host the smelter in a four-city competition involving Sudbury, Thunder Bay and Timmins.

For a city still recovering from a lengthy three-year bankruptcy protection process at Algoma Steel, it was a dose of good news.

Noront’s preferred landing spot is a large brownfield site on Algoma property, just west of the main steelworks. The company recently sealed the deal with a 99-year lease.

The smelter will process ore mined from Noront’s chromite deposits in the James Bay region to be converted into a semi-finished ferrochrome product that will be floated out of the Sault’s port to U.S. stainless steel manufacturers.

But the mere mention of the word ‘smelter’ for Saultites conjures images of belching smokestacks, of noxious fumes spewing from now-obsolete open hearth furnaces, and stirs memories of Sudbury’s charred landscape from the '60s and '70s.

To Coutts, the opposition is perfectly understandable, especially since a smelter hasn’t been permitted in Ontario for 50 years. The Kidd Metallurgical Site in Timmins was the last one.

With anti-mining groups shadowing their project, Coutts said the onus is on his company to be “up front” in presenting their case to Sault residents.

Modern smelter technologies, he said, are nothing resembling those of yesteryear, and today’s environmental regulatory regimes are much more stringent.

“It’s a whole different ball game as far as what standards we’re held to.”

With the furnace designer from Hatch Engineering in tow, Noront plans to deliver a primer to the community on the plant’s technical aspects, how the environmental assessment process works, and provide some insight on Noront’s approach to working with First Nations.

“We want people to understand what we’re building,” said Coutts, who cautioned the plant is in the early design stages rather than being close to construction.

The electric arc furnace design they’ll employ doesn’t require pelletizing or sintering of the ore feed, a process that, Coutts believes, will limit the generation of chromium-6 to minute amounts, which will be then “captured and destroyed.”

No emissions, dust or effluent are allowed to leave their site. The plant will give off a heat signature but any kind of plume will be undetectable.

“Everything that we generate has to be contained on the site. You won’t have clouds of ash or smoke leaving our one-and-half-square-kilometre box,” he said.

Water drawn from the St. Mary’s River will be used for plant cooling, similar to a car radiator, and not mixed into the manufacturing process.

Ultimately, the final say on the smelter rests with federal and provincial regulators who handle the environmental assessment (EA), a process that should last five years.

Noront hasn’t filed any documents to trigger that process, and Coutts said they don’t plan to until they see more progress being made on a north-south access to the Ring of Fire.

Suppes said he would like to believe Noront but one only has to look at Sudbury to see the environmental legacy.

“I think that Noront should say more than trust the process, trust the environmental studies, trust what we’re telling you.”

Based on his research of emissions posted by the Outokumpu complex in Tornio, Finland – built in the late 1960s and considered by some to be the world’s most technologically advanced facility of its kind – Suppes questions if Noront can guarantee the complete elimination of chromium-6 during production.

He wants Noront to provide hard evidence that any dust, emissions and effluents released into the air and water from the plant will be negligible.

“But I don’t think that exists. At least, there’s not from any chromium-6 processing facility in the world that currently has that sort of data.”

From reading comments in local media articles, Coutts sounded eager to put some concerns to rest.

“I don’t know why people think we’re going to build a plant like Tornio. We’re not.”

Other commenters mention construction of tailings ponds and the potential for hundreds of chromite-laden ore trucks arriving daily to pound up city roads, which Coutts disputes.

Through the series of community open houses, he hopes people come away with an educated view before forming their final opinions.

Coutts intends to reach out to local doctors but is slightly amused at their stance.

“Everything they use is made out of chrome. From the bedpans to the scalpels, everything is stainless and it contains between eight and 20 per cent chrome. I wonder if they ever thought about where that chrome comes from?”

Whether the plant gets built, he said, depends on a combination of technical feasibility, meeting the requirements of an EA process, and the company’s own “high expectations.”

“It’s not a rush. It’s a long process. In the end, if we get to a point where we don’t think, technically, that we can satisfy the commitments we made or pass the strict thresholds of the EA processes, we won’t build this – simple as that.”

The possibility exists that Noront ships the chromite offshore to be processed in China, India or Kazakhstan, where there are lower environmental standards, but it’s one option Coutts doesn’t prefer to consider at this point.

He harbours no trepidation about selecting the Sault and doesn’t plan to reopen the site selection process.

“The site is excellent and the partnerships we’ve established there are first rate. We couldn’t be happier with the support we’ve gotten from local politicians, the mayor, the economic development corporation, Algoma Steel, and we really feel welcome there.