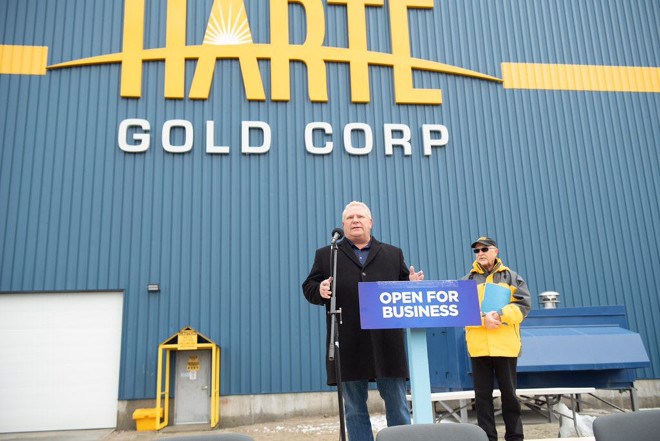 Premier Doug Ford and Harte Gold president Stephen Roman at the official opening of the Sugar Zone Mine, north of White River (Twitter)

The resurgence in mining and forestry in northwestern Ontario is having a transformative effect on the community of White River.

The township’s once-shuttered sawmill has been up and running for the last five years as White River Forest Products, under the legendary Frank Dottori, and 25 kilometres to the north, mining mogul Stephen Roman and Harte Gold are bringing the newly christened Sugar Zone Mine to life.

Located 60 kilometres east of Barrick Gold’s gold complex, it’s the first such development in the Hemlo camp in 30 years.

Harte Gold, which poured its first gold brick in mid-October, was anticipating a visit by Premier Doug Ford to White River on Oct. 24 for the underground mine’s official opening.

With a workforce of 200 locals and transient workers, plus contractors on the scene, it’s boomtown days for the community of 1,300, situated on the Trans-Canada Highway, roughly halfway between Sault Ste. Marie and Thunder Bay.

Housing is at a premium and there’s a glaring need for people to fill industry and service sector jobs, “but it’s all good news to the community,” said long-time Mayor Angelo Bazzoni.

Now on the rebound from the bleak days of 2007, when Domtar pulled stakes in White River and put 195 out of work, Bazzoni declares White River is “open for business,” and opportunity beckons.

“We’ve got a big demand for electrical contractors, millwrights, welders, and even commercial laundry has become an issue in White River when you have a 100 pairs of coveralls that have to be dry-cleaned.”

Restaurants that closed up a decade ago have reopened. Foundations were being poured in October for a new Subway sandwich shop, and the town has added more lots to an expanded industrial park.

Bazzoni leads a pro-business council that teamed with Pic Mobert First Nation to buy the idled saw mill assets off Domtar in 2013 and recruited Dottori to buy in and take over the operation. The majority of the mill’s workforce commutes from surrounding communities.

At the same time, Bazzoni said they poured their efforts into Second Career training for future mining jobs and were attentive to the needs of the mining companies.

The current Harte Gold mine site has been an area of exploration for many years.

When Roman took over as company president in 2009, the township, as part-owner of the mill, worked to extend a logging road to enable the miner to access its remote site off Highway 631.

“It would be safe to say mining is the primary industry in White River,” said Bazzoni. “It’s impacted every business in the community.”

But it’s challenging to attract families to come to a small community for mining and forestry jobs, he added.

“People don’t want to buy houses until they’re confident that the industry is going to stay, that the mine is going to have history.”

Those houses that are available for rent have been picked up by contractors, who are paying in the neighborhood of $2,500 a month.

Harte Gold bought a trailer park and a remote tourist camp for its workers and executives, and council approved Pic Mobert First Nation and Outland Camps to build bunkhouse-style accommodations in town.

The municipality is granting land to any developer that will build social housing rental units and extend their seniors complex so as to convince more residents to put their homes on the market. Some private developers – of which Bazzoni is one – have expanded into the motel and apartment business.

Bazzoni, who runs a service station and roadside motel, is in the middle of a $2-million expansion to bring him up to 55 units with the addition of 12 apartment-style rooms for extended stays.

He hopes that when construction at the mine peters off, their existing housing and accommodations inventory will be sufficient.

For Harte Gold president Stephen Roman, it was a huge relief to land the final operating permits in mid-September to start commercial production at Sugar Zone.

With the premier coming to the site, Roman expressed optimism that the new government will make good on its campaign promise to cut regulatory red tape and find a way to expedite the exploration and mine permitting process.

“As one of the few companies that’s actually moved a project from grassroots right to production, it’s taken us almost 10 years,” said Roman, harkening back to a time when mine projects near Timmins were developed in less than a year.

“We had timelines that were promised to us that came and went. They did things that were totally unexpected and out of the blue, and it was just a constant struggle to move things forward to maintain peace with all the different parties.”

Roman, though, was reluctant to throw stones at the province – with Harte Gold still doing exploration at White River – but he’s hopeful of a better operating environment under the Ford government that will entice mining investment dollars back to Ontario.