Reclamation work being done by Barrick Gold at its Hemlo property near Marathon has changed the landscape of the former mining operation.
Aug 18, 2015 8:20 PM By: Lindsay Kelly 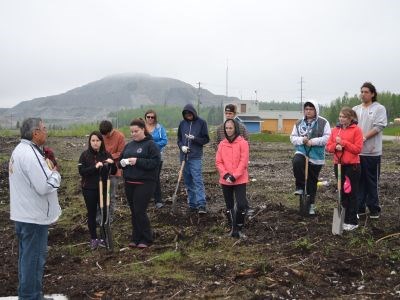 Reclamation work being done by Barrick Gold at its Hemlo property near Marathon has changed the landscape of the former mining operation. Where once there stood a headframe, access roads and outbuildings, there is now only a grassy plain, accented by native trees and inhabited by a variety of wildlife.

This is what nature after mining looks like in 2015.

“It kind of caught us off guard, because the (David Bell) mine is still beside an operating mine,” said Shane Hayes, Barrick’s mine closure co-ordinator at Hemlo. “The area has been rehabilitated so quickly, I’d be lying if I said we weren’t surprised at how quickly nature re-established itself.”

Three mines started up at the Hemlo site in the 1980s. The still-operational Williams Mine produced 206,000 ounces of gold in 2014, while David Bell closed that same year. A third mine, Golden Giant, closed in 2010. The bulk of the rehabilitation work to date has focused on David Bell.

Jeremy Dart, Barrick’s environmental superintendent at Hemlo, said reclamation efforts have been a priority for the company, and it’s done numerous studies over the years to ensure the efficacy of its closure plan.

“A typical example is, when we purchased the Golden Giant Mine site, we updated our closure plan to ensure that we had a good program in place to take of the remaining hazards that were left on the property once we acquired it,” Dart said.

“That started right from the demolition of the foundations that were left from when the buildings were removed in previous years through to hauling in topsoil, capping the open holes from the underground, and then bringing in our tree-planting and seeding programs.”

In 2006, the company engaged local youth from Pic River First Nation, Pic Mobert First Nation, Manitouwadge and Marathon in tree-planting efforts, which began at abandoned aggregate pits and evolved to the mine site. To date, 30,000 trees have been planted at the Hemlo property.

A number of innovative ideas are now being implemented at the site.

Barrick is working with Laurentian University researchers to develop a technosol — a manufactured topsoil comprised of non-acid-generating rock and native woody material — for use at the site.

“When we started looking at it, we contacted Laurentian and we told them what sources of material were in the area, and one of the ones that came up was the wood waste from, what was at the time, a closed sawmill,” Dart said.

Though the company considered sludges from pulp and paper mills for the mix, it ultimately went with the woody material because of the close proximity of the mill to the mine site, he said.

Barrick is additionally partnering with researchers from Lakehead University to cultivate native plant species with phytostabilization capabilities, such as willow, dogwood and poplar.

“Because the site’s being rehabilitated on top of a disturbed site, and it’s obviously a mineralized area, the advantage of using the native plant species is they won’t uptake metals in through their root systems,” Hayes said. “So we anticipate having a better growth rate by selectively using phytostabilizing plant species to help rehabilitate the site with.”

Not only does using these plants speed up the process, but it encourages the long-term propagation of a healthy, self-sustaining forest, he added. Now that the native plants have had time to germinate and take root, seeds will be collected into a native seed bank, along with cuttings from native plants, for use in subsequent rehabilitation efforts.

“We’re growing them in a greenhouse to further establish them, so that when the spring comes, we’re using the trees from the immediate area to establish new growth on the plant site,” Hayes said.

Community involvement has played a big part in shaping the rehabilitation efforts, as the measures being taken by Barrick have all come through consultation with the communities of interest in the surrounding area and been implemented by First Nation contractors.

Over the next five years, any remaining buildings will be removed from the site, and then similar work will be done at Golden Giant: capping open holes, knocking down building foundations, and starting reclamation. Stormwater ponds will be monitored until water quality returns to pre-mining conditions, Dart said.

Eventually, once the hazards have been removed and stakeholders are satisfied with Barrick’s scope of work, the land could be released back to the Crown.