Last summer, a lake water crew with the Ontario Geological Survey (OGS) was being transported by helicopter to a research spot when one of its blades clipped a treetop, causing a wobble in the chopper’s flight.
Mar 27, 2014 1:41 PM By: Lindsay Kelly 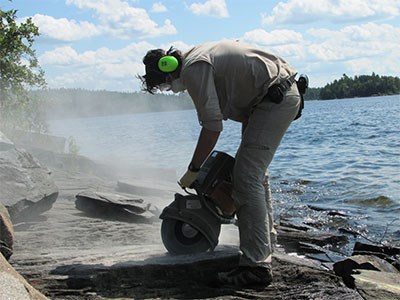 Health and safety while working in the field includes the safe use of equipment like a rock saw used to take samples for analysis.

Last summer, a lake water crew with the Ontario Geological Survey (OGS) was being transported by helicopter to a research spot when one of its blades clipped a treetop, causing a wobble in the chopper’s flight.

After landing immediately, an inspection revealed a badly damaged blade and $80,000 damage, but the result could have been much worse, said Jack Parker, senior manager of the earth resources and geoscience mapping section of the OGS.

“That could have ended tragically,” Parker said during a presentation hosted by Workplace Safety and Prevention Services. “You never know when an accident’s going to happen like that.”

Transportation through rough terrain is one of many hazards faced by OGS crews out in the field, where geologists and summer students collect data used in mineral exploration. Workers can encounter biological hazards like animals, bacteria and insects; physical threats like slipping and falling; or psychological hazards like the effects of working in isolation for long periods of time.

Health and safety used to be regarded as an afterthought, something the industry did to protect itself from liability, but Parker said over time that’s changed, and it’s now regarded as integral to the job.

“There’s been a real cultural shift in our organization where safety is the first order of business,” he said.

The OGS has 40 employees, 29 of which are professional geoscientists. During the summer, the organization hires 35 to 40 summer students to work on field crews across Ontario. Education starts during recruitment, where supervisors favour prospective employees with some experience in the bush, whether they’ve been camping with their families or taken a canoe trip with the YMCA.

Students themselves are starting to recognize the need for safety knowledge and now often come to the job with training in place: they’ve been educated in WHMIS principles, they have standard first aid training, and many already possess their Pleasure Craft Operator Card, which is now mandatory for OGS workers.

Still, some have worked for mineral exploration companies without receiving any safety training in the field or in school. Parker tells the story of one student who was told by his employer: “Here’s a chainsaw; go cut down that tree.”

After they’re hired, students spend two weeks training in areas such as off-road truck and ATV driving, how to use a chainsaw, and bear avoidance techniques.

Each field crew must develop an emergency response plan, including documentation about how to respond in the case of various emergencies and a contact list, and all must have on hand the OGS health and safety manual, a document detailing the OGS’ best practices from the field, which gets updated regularly.

“Our health and safety program is all about risk mitigation,” Parker said. “We have initiatives and practices to create a culture of field activity, health, safety and environment.”

Parker said he spends a lot of time going over rules and regulations regarding the consequences of unacceptable behaviour. Living and working in isolation with the same people 10 hours a day for six weeks at a time can take its toll psychologically, in some cases leading to discrimination, harassment or bullying.

The message to students is their summer employment should be a learning experience, but they also must learn to do it safely, Parker said.

“We expect them to be engaged and interested in what they’re doing and to learn and ask questions to better understand and to be responsible,” he said.

Because of its diligence, the OGS can boast a high safety record. The organization hasn’t had a lost-time injury since 2007 and no fatalities since the organization’s inception in 1888. Since 2008, the OGS has been recognized by the Prospectors and Developers Association of Canada (PDAC) with the Safe Day Every Day Award.

The OGS has developed a positive reputation amongst young geologists and university students who now seek out employment there because of its emphasis on training and safety, Parker said.

Since implementing and monitoring its health and safety program, the OGS has seen efficiencies in its operations, reduced operating costs and downtime, and less damage to equipment. That leads to better morale in the camps, which leads to improved products, Parker said, because the maps are better if morale remains high and people are working safely.

“When we’re out in the field, the reality is there’s no 911,” Parker said. “In this type of environment, the worker has to be prepared for various situations that could pop up, and so preparation and training is essential for that.”