When Roger Rondeau headed to Toronto with samples of his innovative apparel last March, he was surprised to leave the Prospectors and Developers Association of Canada (PDAC) annual convention empty handed.
Jan 19, 2016 2:33 PM By: Northern Ontario Business Staff 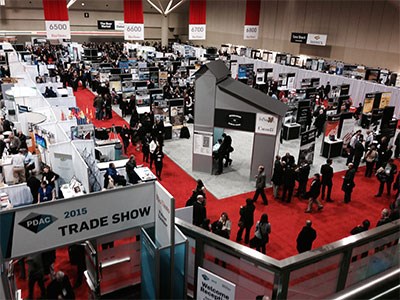 When Roger Rondeau headed to Toronto with samples of his innovative apparel last March, he was surprised to leave the Prospectors and Developers Association of Canada (PDAC) annual convention empty handed.

“We just brought [our product] for display, and we wound up selling most of it on the last day,” said Rondeau, owner of On Duty Equipment.

The New Liskeard company was showcasing their new load bearing vests designed for miners. It was their first time at the largest convention for mining exploration professionals. They joined 55 other businesses as part of the Northern Ontario Mining Supply Showcase, a pavilion funded by a $390,000 grant by FedNor, and going into its third year this March.

PDAC's convention typically draws over 1000 exhibitors, 23,500 attendees, from over 100 countries. While a primary objective is professional networking, attendees will also benefit from educational sessions and sales opportunities.

“It goes beyond the direct B2B thing,” said Marla Tremblay, who organizes the showcase. She said the follow up survey indicates the 2015 showcase generated over $3 million in sales and over 40 new partnerships for participating companies. This year, the showcase will have 70 participants.

Rondeau said he gained access to international markets through the convention. He has made connections in Peru, Australia, France, and across Canada. Rondeau is excited to showcase On Duty's newest addition to their apparel line this year. The G2 vest introduces a more breathable design, and other features geared to warmer climates he hopes to expand into.

James Franks is the economic development officer for Temiskaming Shores, and he's been attending the convention since 2011 when Elk Lake and the Township of James went down to promote mining in northeastern Ontario. The FedNor support allowed the creation of the showcase and inclusion of businesses across Northern Ontario. A solo booth costs upwards of $2,000, while the showcase booths go for just $500.

“The reality is, if we didn't have FedNor's support, we wouldn't be able to pull off this activity,” said Franks. “We're able to offer those businesses a discounted space rental, we're able to hire Marla to put it all together, and we hire a company to lay out the exhibit so it's all matching, to ensure continuity.”

Tremblay said she anticipates more traffic at the showcase this year. While this is their third year attending, it is only their second year in the north hall of the Metro Toronto Convention Centre. As the largest pavilion at the convention, they certainly need the space.