If all goes to plan, Noront Resources could begin work on its Eagle's Nest project in the Ring of Fire by 2017, said the Paul Parisotto, the company's chairman and director.
Feb 28, 2014 4:57 PM By: Jonathan Migneault 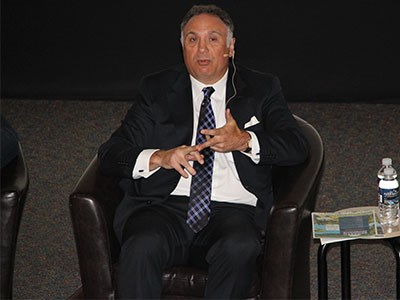 Paul Parisotto, Noront Resources' chairman and director, said he expects to begin mining operations in the Ring of Fire by 2017.

If all goes to plan, Noront Resources could begin work on its Eagle's Nest project in the Ring of Fire by 2017, said the Paul Parisotto, the company's chairman and director.

Despite a number of obstacles that have brought development of the Ring of Fire to a near halt, Parisotto said he remains optimistic about his company's stake.

“We're very committed to building this mine as soon as we possibly can,” Parisotto said Thursday, at a forum organized by the Ontario Chamber of Commerce to coincide with a new report critical delays in the Ring of Fire.

“Things have moved slowly for a number of reasons,” Parisotto said. “That's in the past. We are where we are today.”

Noront has poured around $200 million into the Ring of Fire so far, where the company has its only mining properties.

In contrast, Ohio-based Cliffs Natural Resources, ceased work on its $3.3-billion Ring of Fire development in 2013 due to a number of major hurdles. Those included a lack of agreements with First Nations in the area, and a lost appeal to the Ontario Mining Commission late last year that would have allowed the company an easement on the property to begin planning the necessary infrastructure.

Cramer said the company has not withdrawn from the Ring of Fire altogether, but will not resume work in the region until it sees action from government to resolve its outstanding issues.

Cliffs has called for a north-south road to the Ring of Fire, while Noront has said an east-west road would make more economic sense, and would benefit the nearby First Nation communities more.

But Parisotto said if the government were to go with a north-south road, Noront would continue with its developments in the Ring of Fire.

Josh Hjartarson, the Ontario Chamber of Commerce's vice-president of policy and government relations, said there needs to be bottom-up pressure on all levels of government to better support the Ring of Fire.

“The reality is we need to get going,” Hjartarson said. “People in Sudbury, Thunder Bay and Timmins understand what the Ring of Fire is and the potential. People in southern Ontario don't have the same understanding.”

The chamber report, titled “Beneath the Surface: Uncovering the Economic Potential of Ontario's Ring of Fire,” said the Ring of Fire is expected to generate $25 billion in economic activity across numerous sectors in the province over its first 32 years of development. In the same period, the Ring of Fire would generate an estimated $6.7 billion in government tax revenues.

Hjartarson said the project is expected to generate 4,500 to 5,500 long-term and well-paying jobs. He added the federal government needs to show the same commitment to the Ring of Fire as it has to Alberta's oil sands – making it a national priority.

The report's authors – including Dalton McGuinty's son Liam McGuinty – called on provincial and federal governments to design and fund a plan to address inadequate transportation infrastructure in the region, which they cited as a significant barrier to development.

The Ontario Chamber of Commerce plans to release a one-year report card on the project's progress in 2015.

Christine Kaszycki, the Ministry of Northern Development and Mines' Ring of Fire co-ordinator, was in attendance at Thursday's forum.