Unsure of what she wanted to do after some post-secondary education, Armanda Farrell submitted her resumé to the Dome Mine in Timmins six years ago.
Aug 6, 2013 2:57 PM By: Liz Cowan 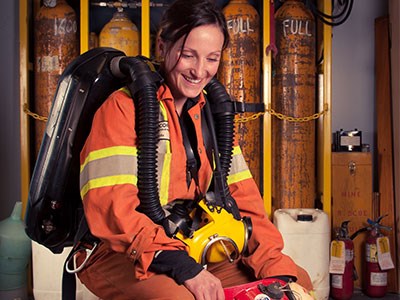 Armanda Farrell sits in the mine rescue substation at the Dome Mine in her Drager BG4 breathing apparatus.

Unsure of what she wanted to do after some post-secondary education, Armanda Farrell submitted her resumé to the Dome Mine in Timmins six years ago.

She and another woman were hired to work in the mill, part of Goldcorp’s Porcupine Gold Mines operation.

After meeting the supportive crew and trainer, she felt better.

“It wasn’t what I thought it was.” Farrell spent three years in the mill and then transferred to the underground department where she has worked for the last three years in track maintenance.

“It is a very physically demanding job but I find it very rewarding,” said Farrell. “I compare it to making a deck every day where you have a finished product.”

She is also the first woman to be part of the mine rescue team, a position she has held for the past two years.

“I really feel it is an honour,” she said. “I did have some concern that I would be the token female and I raised that with my coach. But I was told that I did earn the spot.”

Being on the competition team requires a lot of physical requirements. The breathing apparatus weighs 17 kilograms but she said it becomes like second nature after getting used to wearing it.

“To go on the team you have to show initiative that you want to be involved in the general mine rescue program. And then based on that, and feedback from the mine rescue officers and expressing interest in the competition team, they look at how enthusiastic you have been and how much initiative you have shown,” Farrell said.

“With being on the team, there is some self-doubt you project onto yourself and sometimes you think others have the same opinion about you. But I have had so much support from everyone, especially the women, and they have come out to support the team.”

The team nabbed second place this year and came first last year in the district competition.

“It was the most challenging thing I have done in my life and probably the thing I am most proud of so far,” she said.

Her great-grandfather died of silicosis and her grandfather never wanted any of his children to work in a mine. Her family was apprehensive at first about her career choice and her grandparents were a bit upset when she began to work underground.

“Mining has evolved so much since those times,” Farrell said. “Now my grandmother sees the photos of me in the mine rescue team and she is proud.”

She started as a labourer at the mill and then worked her way up to Operator 1. She enjoys learning and taking on new challenges so she began to look at other opportunities in the mine.

Currently she has her track specialty, which is a dying art.

“Most mines don’t have track mining, which is a small underground railroad. It eliminates a lot of diesel emissions but it is a high-maintenance mining process,” she said.

She spent her first four years at the mine working shift work but currently works days Monday to Friday.

“I would recommend working for a company like Goldcorp, and if a woman is interested in getting involved in the industry, do the research and give it a chance. It is a career that will open a lot of doors for you if you are willing to try it,” Farrell said.

“This is it for me. Once you become involved in mining, it becomes a part of you. Not just the industry, but the people too.”