On any given day, Cheryl Recollet’s desk is littered with mining exploration plans, government notices, permit requests, and more, but with limited resources, it can be a struggle to vet them all in a timely manner.
0
Sep 27, 2016 12:37 PM By: Lindsay Kelly 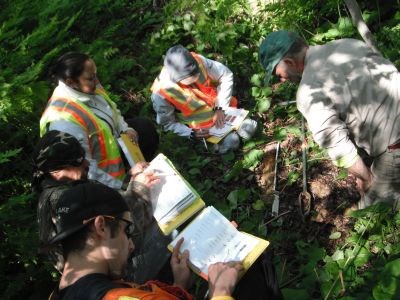 Wahnapitae First Nation has developed its mining expertise over the last 20 years, and now advises other communities through its Tahgaiwinini Technical and Environmental Services Group. Photo by Heidi Manitowabi

On any given day, Cheryl Recollet’s desk is littered with mining exploration plans, government notices, permit requests, and more, but with limited resources, it can be a struggle to vet them all in a timely manner.

Yet the people of Wahnapitae First Nation are determined to be active and educated participants in the resource development activity taking place in their traditional territory.

“We recognize that in order to make informed decisions, we must actively participate in the process,” said Recollect, director of sustainable development for Wahnapitae First Nation, located 60 kilometres north of Sudbury.

“How do we make sure this information is getting to our leadership if we aren’t aware of what’s happening at all stages?”

Since its relationship with INCO (now Vale) was first established in 1996 — Wahnapitae helped inform the closure of INCO’s now-defunct Whistle Mine — the community has slowly but surely gained knowledge and expertise in the area of mineral exploration.

The community is on board with mineral exploration and development, but with several priorities in mind: stewardship of the land, enhanced involvement, developing partnerships, and achieving community needs.

“Our resource development policy provides a coordinated approach,” Recollet said. “It basically says that if you’re going to be operating in our territory, please let us know.”

Recollet was one of three speakers to present to the Sudbury Prospectors and Developers Association on Sept. 20 to share their perspectives, as Indigenous stakeholders, on mineral exploration in the Sudbury area.

“When proponents are interested in doing exploration work or working on our traditional territories, it's a pretty easy process,” he said. “What we're looking for is for them to come to our band office, or have a letter submitted stating their intents and what they're going to be doing on the lands, so that our community can make an informed decision.”

From there, someone will go on to the land to see the site and collect baseline data, visiting again during and after the work to determine any impact to the land.

The community currently has “a couple MOUs and one advanced exploration agreement with KGHM,” but it’s still working on increasing its capacity. This fall it will hire a mineral development advisor to join Paishegwon and his assistant in the community consultation department.

Sagamok Anishnawbek, too, is “bombarded by a lot of paperwork,” said the community’s director of lands, resources and environment, Ross Assinewe, who leads a department of five people.

When it comes to development, the company is guided by concerns for environmental protection first, followed by the preservation of Aboriginal and treaty rights, and finding contracting and employment opportunities for community members.

“We want to make sure that nothing is going to infringe on our Aboriginal and treaty rights.”

The community, which has a membership of 2,750, is situated an hour west of Sudbury at the mouth of the Spanish River.

Despite falling under the Robinson Huron Treaty of 1850, which stipulates a “resource-revenue sharing benefit” with the community, each band member receives a measly $4 annually. Assinewe said, with millions in resource development being generated in Sagamok’s traditional territory every year, the community wants to see a more fair allocation of revenues.

“We’re not trying to bankrupt anybody, but we’re just saying, ‘Hey, pay up,’” he said. “‘Let’s make it a little bit more significant than $4 a year.’”

Until the downturn began a few years ago, Assinewe said the community has had contracting opportunities with Vale and KGHM, and he’s hopeful nickel prices will rise again soon so they can get back to business.

Sagamok is also looking to foster relationships with other, non-Indigenous partners to gain experience and skills, and develop a solid track record so that when the work does become available, they’re ready to take it on.

“(Current) contracts (with mining companies) are expiring,” Assinewe said, “and we’re ready to take the next step.”