Using sex appeal to promote the Ring of Fire doesn’t sit well with the senior leadership of the Matawa First Nations.
Aug 19, 2016 1:46 PM By: Ian Ross 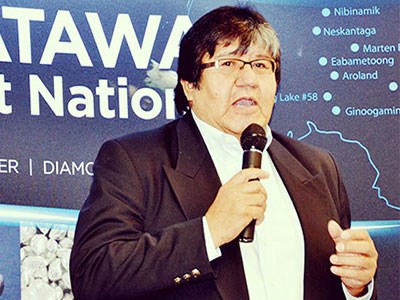 Using sex appeal to promote the Ring of Fire doesn’t sit well with the senior leadership of the Matawa First Nations.

“KWG really needs to be more respectful of our leadership and especially our peoples. But certainly we are very insulted on this approach.”

KWG Resources of Toronto, a junior exploration firm with chromite claims in the Ring of Fire camp, released a campy promotional video featuring two models in bikini tops and short shorts talking about the mineral potential in the region in early August.

One of the two models, who’s sitting on a swing in cottage country setting, said First Nations are “interested in sharing in the resources.”

Achneepineskum had been attending the Keewaywin Conference, a meeting of 49 First Nation communities, at Taykwa Tagamou Nation near Cochrane, as the video went viral last week through social media.

“It’s very offensive to use that kind of video to try and sell his (Smeenk’s) property. To me, there are proper ways of trying to attract investors and interest in the First Nations in working with him.”

If the video was meant to be a tongue-in-cheek educational video on the Ring of Fire, the message was lost on Achneepineskum.

“Personally, I found the video very insulting. I don’t know what his intentions are but certainly he’s offended a lot of people, not just us but the mining industry.

“Hopefully the next videos that come out will be more tasteful.”

Achneepineskum said Smeenk needs to make more of an effort to carry out “serious and active consultation with the communities.”

“Certainly Frank is kind of distancing himself more and more from the leadership. They can’t take him seriously in terms of his willingness, or even his wanting, to talk with First Nations at all. I don’t think they’re taking him seriously.”

Achneepineskum said KWG has a ways to go to earn the respect and trust of the communities if they expect to receive consent or approval for their project to proceed.

Achneepineskum said KWG has made some attempts at outreach, but nothing by way of actual consultation on their plans to attract Chinese engineering expertise and investment to fund a Ring of Fire railroad.

His comments triggered a sharp rebuke from Moe Lavigne, KWG’s vice-president of exploration and development.

“When David Paul said we haven’t made any effort to communicate with First Nations, that is absolutely wrong. It is only he that we do not communicate with unless we have the authority of the chiefs.”

According to the rules of dialogue, Lavigne said the individual community chiefs get “very annoyed” when KWG talks to Achneepineskum and the tribal council before them.

Lavigne said Smeenk has “worked very hard” at building relationships with all the bands near the Ring of Fire, particularly in maintaining dialogue with the chiefs of Webequie and Marten Falls. The two communities sit astride of KWG’s proposed north-to-south railway corridor.

Last April, KWG huddled with engineers from China Railway FSDI and Krech Ojard of Minnesota in Thunder Bay prior to a flight to examine the junior miner’s proposed railroad corridor.

“As far I know, our First Nations weren’t invited to that presentation in Thunder Bay,” said Achneepineskum. “KWG is not taking the First Nations seriously at all in terms of getting them involved in initial discussions.”

Lavigne disputed that by saying just prior to last spring’s meeting with FSDI, his company sent emails to a “large number” of bands – addressed to chief and council – asking them if they would like to meet the Chinese delegation, if the Chinese engineers could visit their communities or, alternatively, if a meeting could be arranged in Thunder Bay.

As often happens, Lavigne said, there was no response.

“The vast majority of First Nations to which we send (messages) to chief and chief do not respond.”

Why they choose not to respond, Lavigne said, is a mystery.

“We are constantly reaching out to the First Nations hoping for a response and we get a few.”

Lavigne said constant emailed notification to the bands near the Ring of Fire has been KWG’s procedure at every stage of development.

“I can bury you with paper if you want, because there’s a lot of them.”

In June, KWG offered a limited partnership proposal to two Matawa communities – Webequie and Marten Falls – to take an equity stake in their chromite development and railway, offering $40 million in loans to the communities. The company said discussions have taken place with Webequie Chief Cornelius Wabasse and Marten Falls Chief Bruce Achneepineskum.

Lavigne said that offer wouldn’t have been made if Smeenk didn’t have ongoing dialogue with the chiefs.

How concrete that proposal was, David Paul Achneepineskum wasn’t taking it seriously.

“From what I understand it was just information about KWG’s intent to look at the feasibility study for railroad to the Ring of Fire area.”