Chinese railroaders like the route to the Ring of Fire 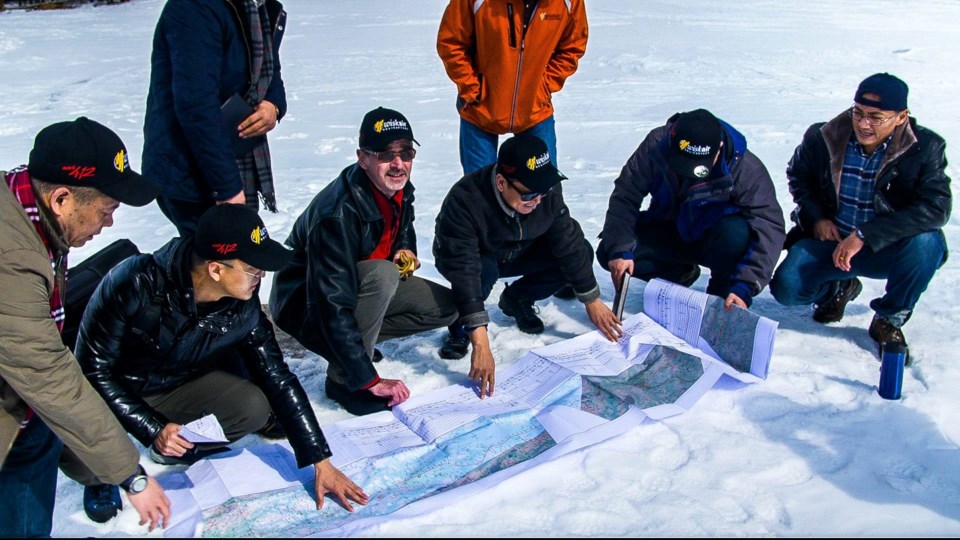 China Rail delegation and Moe Lavigne of KWG Resources check out the route to the Ring of Fire in the spring of 2016.

A delegation of KWG Resources and Marten Falls First Nation (MFFN), one of the communities near the Ring of Fire deposits, completed a trip to China to lay the foundation for a Far North railway and project financing.

A June 1 KWG release said the group was provided with an overview of the feasibility study began last year, when they most recently visited with their project partner, China Railway First Survey & Design Institute Group (FSDI), at its headquarters in Xian, China on May 15.

The company was advised by its Chinese partners that the study had concluded that the route which traverses the Marten Falls’ traditional territory was a viable alignment for the construction of a chromite ore-haul railroad.

The study estimates that at a capital cost of US$1.965 billion such a railroad could be constructed to transport 10 million tonnes of chromite annually by 2030, potentially growing to a yearly volume of up to 24 million tonnes by 2040.

As a proponent of a north-south railroad, the Toronto-based chromite developer is looking to source financing and secure supply agreements from within the Chinese stainless industry.

“We were also glad to see and understand the scope of the design of their feasibility study and the very large-volume mining operations that might be possible,” said Marten Falls Chief Ambrose Achneepineskum in a KWG news release, who found the trip informative in helping his community understand what future development could involve.

“It is helpful to understand the intricacies of doing business with the world’s biggest consumer of ferrochrome, for us whose traditional territory may become a big source of its supply through a process of free, prior and informed consent. We also look forward to and welcome the involvement of other regional First Nations whose traditional territory might become a part of the planning process.”

Before the trip, KWG was asking for a “$1 billion guarantee” from the provincial Ring of Fire Infrastructure Development Corporation to use as “consideration for project financing terms from Chinese lenders.”

“We were grateful to be introduced by our friends at FSDI to the management team of the Overseas Investment Department of their affiliate China Railway Construction Investment Group,” said KWG president Frank Smeenk in a statement.

“We were able, in follow-up meetings, to begin discussions on the parameters of financing programs that might be available under China’s ‘One Belt – One Road’ infrastructure initiatives, for this kind of development opportunity, as our two countries consider free trade negotiations.

"It was gracious of Chief Achneepineskum, former Chief Lawrence Baxter and MFFN Advisor Qasim Saddique to make the time available to join us in this most informative mission to explore the Ring of Fire’s development potential. The scope of the possibilities being considered is certainly breathtaking.”