Chris Astles, general manager at Cameco's Blind River uranium refinery, definitely has his finger on the pulse of the place.
Oct 14, 2009 1:13 PM By: Ian Ross 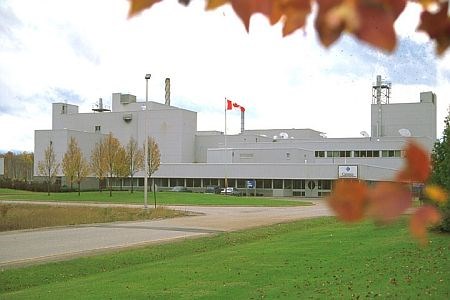 Employee engagement and community service are cornerstones are why Cameco Blind River has a good reputation on the North Shore. (Photo supplied)

Chris Astles, general manager at Cameco's Blind River uranium refinery, definitely has his finger on the pulse of the place.

After 26 years, the Blind River native is literally one of the refinery's original plankholders of the plant, located half-way between Sault Ste. Marie and Sudbury.

The complex holds the distinction of being the world's largest commercial uranium refinery.

The 160-employee plant, which is a mixture of locals from along the North Shore and professionals recruited from afar, has an astounding employee turn-over rate of less than one per cent.

As young engineer working for U.S.-based Lummus in the early 1980s, he was involved in the construction of the facility, the same company that built the Bruce Nuclear plant. As Lummus packing up after the 1983 plant commissioning, Eldorado, (which became Cameco) asked Astles to stay and grow with the company.

Being there from the beginning has been a huge advantage to creating an engaging employee and community-oriented atmosphere.

Prospective employees hear all about Cameco's culture during the interview process. “We use the 'family' word quite a bit here,” said Astles.

What's important to find a balance between work and personal life. The Blind River site offers flex hours or modified work weeks where an employee works an extra half-hour and get a day off at month's end.

“When we try new programs with employees, we like to bring suggestions forward,” said Astles. “We have this attitude here, we'll try anything so long as it doesn't impact production.”

In the last three years, Cameco has been on a hiring spree, adding 60 people due to production increases. As well, a third of their workforce set to retire within five years.

Because of Cameco's sterling reputation as a good employer, word of mouth is enough to keep the job applications flowing in.

In terms of the rules of work, Astles holds a lot of autonomy to do what's best for the site.

Obviously there are performance indicators to follow in monitoring operational costs, meet production and environmental targets, but community relations and involvement is something that's stressed from corporate on down.

“We do respond to their requests and we do go out of our way to make sure we give them support of some kind be it monetary or prizes,” said Astles.

Two years, Cameco bought playground equipment for the town and sent employees out to assemble it.

Where production schedules permit, the refinery will be shut down for their Community Appreciation Day and 100 to 120 employees let employees will go out into the community to do odd jobs such as helping seniors with spring cleaning, painting playground equipment or cleaning up the local marina.

STARS is a Cameco program started by Astles seven years ago in local schools for teachers to reward students for areas in improvement in academics, attendance, neatness and behaviour with prizes of Kentucky Fried Chicken vouchers.

Their Giving Campaign involves helping a different charity every year or supporting a local cause, such as raising money for new hospital X-Ray equipment through employee payroll deduction.

Another new program this year is Cameco's summer day camp for kids.

“It's a small town with not a lot of money here so we recognize that younger kids don't have a lot of activities in the summer,” said Astles. “We have a young workforce here and our employees have kids out there as well.”

The company regularly takes public opinion surveys in their host community. “We want to know how the local community feels about Cameco,” said Astles.

Their last results were pretty favourable with 94 per cent approval rating from local residents.

What's important to Astles is maintaining a “flat line management style” involving MBWA (Management By Walking Around) principles. Site leaders spend a good chunk of time on the floor interacting with employees and solving problems.

“I get to work quite early in the morning and I'm in the floor a good four to five hours a day,” said Astles. “I want to know what's going on and I want people to come to me saying, I'm seeing this, how do we fix it? After 26 years of operating here, there are not a long of surprises left to me.”

Their regular 'Pat on Back' awards goes to employees for “going above and beyond the call of duty” and usually involves a gift voucher for free meal at a local restaurant.

To make the workday pass better, every financial quarter the company pays for an employee lunch where they fire up the barbecues and gather to socialize and allow Astles to deliver messages on what's going on with the company.

A fitness room has just been installed with modern equipment and employees are encouraged to use it during their lunch breaks. Guest speakers on exercise and health issues are also brought in for their active Lunch & Learn program.

Safety is huge at Cameco. The facility had an 11-year streak of no lost-time accidents which garnered them a couple of national awards.

Their current record is more than three years since the last accident, which consistently ranks them first among Cameco's eight North American sites.

There are corporate safety awards for employees, departments and sites. Every year when they reach an anniversary without an accident, employees are give a choice of gift that goes up in value every year.

“We've been giving away barbecues, bikes, all kinds of stuff,” said Astles.

While it's an open door policy for employees, it's also the same with the community. Cameco hosts a couple thousand visitors every year with public open houses.

“We're actually quite proud of the site,” said Astles. “It's a very clean operation and we like to brag about it. We want people to know what we're doing. We don't want to be perceived as hiding or keeping secrets.”

The company is a regular annual participant in the Hewitt Survey, a tool used to select the Top 50 employers in Canada. Last year, the Blind River site scored 85 per cent for employee engagement.

“We got the employees involved, put it to them (and said) you're the ones that make it a good site,” said Astles. “What do we do as management is implement your ideas? ”The employees have made it a good place to work.”

Granted there are always day-to-day issues, but management stresses taking a positive attitude and places a premium on sharing information.

“We're willing to make improvements,” said Astles, “so we say don't be afraid to come forward with issues. But definitely our employees are our greatest ambassadors.”