Kyla Jansen's farm didn't become environmentally friendly by design. But when you live in a rural area where services are limited, adaptability is your best asset.
Oct 15, 2012 1:37 PM By: Lindsay Kelly 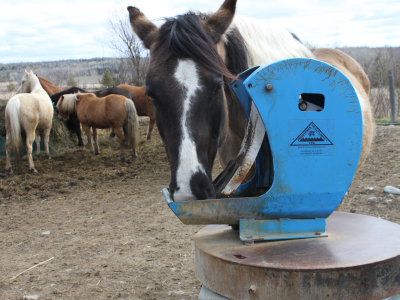 Scotty drinks from one of two frost-free nose pumps installed at Kyla Jansen's farm in Honora Bay on Manitoulin Island. It allows the horses access to fresh water, even during the winter months.

Kyla Jansen's farm didn't become environmentally friendly by design. But when you live in a rural area where services are limited, adaptability is your best asset.

“There's no hydro—basically going green was my only option,” laughed Jansen, the owner of Honora Bay Riding Stables on Manitoulin Island. “It wasn't initially necessarily because that's what I planned. It is now a fairly large focus because, number one, it's much healthier and if I can do stuff like that, great. But it wasn't my initial focus; my initial focus was to find a place for my horses to live.”

When the Islander acquired her property in 2006, it was with the intention of providing riding lessons and trail rides. In under a decade, she's transformed the former gravel pit into an equestrian's playground, with riding trails, a barn, boarding stalls, an indoor riding arena, and acres of pasture where she provides trail rides and riding lessons, and hosts clinics in everything from horseman­ship to vaulting.

And she does it all with the health of her horses and the environment in mind.

Last year, Jansen's farm was recognized by the Ontario Equestrian Federation as one of the most eco-friendly in Canada, earning the 2011 Just Add Horses Environmental Award, which is presented annually to the individual or group “who have been deemed most dedicated by their equine peers to have helped raise the environmental bar.”

Her quest to reduce her environmental hoofprint began about five years ago when she installed a frost-free nose pump for her horses, a system commonly used with cattle, but still unique in its use with horses.

The system, which comprises an insulated culvert drilled 20 feet into the ground, allows the horses to pump out their own water by pumping a paddle with their noses. Water travels up the pipe and drains back down when the horse is finished drinking.

The pump was so successful, she installed a second one last summer.

Tired of using a smelly, loud generator to access hydro at her property, Jansen then installed a solar array that supplies her with about 2,000 watts at full power—equivalent to that used by an average household—which powers the arena lights, heaters in the winter, electric fences and any machinery she needs.

“Your initial cost is high, but my hydro bill will never go up,” she said. “It probably works out to paying less than $100 a year for the next 20 years.”

This year Jansen upgraded her generator to a propane model to have on hand for backup, but the solar array has meant this last year was the first she was self-sufficient year-round.

Manure, the farm's biggest source of waste, is handled in two ways. In the summertime, it goes directly back onto the pastures via a ground-driven manure spreader. Jansen and her students muck out the stalls into the spreader and drive directly onto the fields to disseminate it.

This past winter, Jansen had a cement-based aerated manure pit built on the property to accommodate the waste. Manure is collected from the horses' stalls and dumped into the pit where it accumulates until the spring.

A local contractor picks up the waste in the spring and fall and distributes it to clients who use it for compost. In exchange, Jansen is provided with any gravel, sand or other aggregate she needs on the farm.

“It's nice because it's local businesses supporting each other,” she said.

Her green sense is evident in other areas of the farm. Her barn was built with skylights to let in lots of natural light, which is not only healthy for the horses, but also reduces the need for lighting, and the trained farrier recycles her used horseshoes into barn hooks for the horses' tack.

This year she'll install a pump house, powered by her solar array, to provide running water, but otherwise her green business is just where she wants it.

“We have no waste, we have hydro from the sun, we have a water system that the horses use themselves,” she said. “There really isn't anything else that I need. I've got everything—finally.”