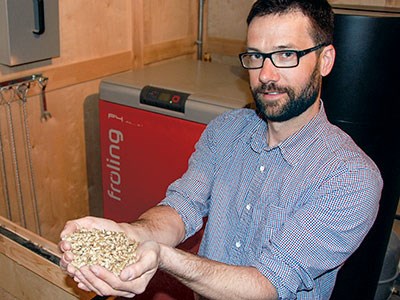 Vince Rutter of Biothermic Renewable Energy Systems is a distributor for Froling, a wood pellet and chip manufacturer of biomass-fired boilers.

Northern Ontario’s bio-economy prospects have been dealt a hit with the incoming Ford government’s pre-emptive strike to kill a multitude of provincial cap-and-trade programs.

A week before the Ford government’s June 29 swearing-in ceremony, word went out from Queen’s Park that a slew of Green Energy Ontario programs were being closed, including the $6.7-million Modern Wood Heating Pilots for Sioux Lookout, Wawa, Wiikwemikoong Unceded Territory on Manitoulin Island and six Nishnawbe Aski Nation communities in northwestern Ontario.

The program was one of the pre-election goodies announced in early May by the Wynne government shortly before the writ was dropped.

No details were given on what, if any, new green energy programming will be rolled out.

“The Conservatives have essentially said that climate change isn’t real by deciding to kill these measures.”

Rutter called the elimination of Green Ontario (GreenOn) funding a “terrible blow” to companies that were relying on government incentives to encourage homeowners, commercial property owners and business to make the move to wood heating.

His company is a distributor of European-made commercial and institutional wood-burning boiler systems.

Rutter has been a regional leader in gradually growing public and political acceptance of clean-burning technology.

“We’re missing a huge opportunity with wood because we import all our energy,” he said.

Rutter believes placing a value on carbon through mechanisms like a tax makes home-harvested and value-added wood heating opportunities in the North much more competitive with other forms of energy.

“Wood heating will out-compete propane, fuel oil and electricity on its own merits. It’s cheaper to heat with wood than other options. But the capital cost of system installation is high, so it’s very difficult for people to spend on a more expensive heating system to get a long-term payback.”

Though expensive to install a commercial boiler system, Rutter said the return on investment can be between five and 20 per cent.

“We need either a solid carrot or stick to make wood heating more attractive and by killing cap and trade you are taking away both, which were working together to improve the prospects of uptake.”

Rutter recently introduced a $400,000 heavy truck with a silo body to solve the economical and distribution challenges of hauling pellets across the North.

It would support his grander plans to establish regional pellet depots.

Without knowing if the Ford government is interested in cultivating any green energy opportunities, Rutter said it effectively stymies his growth plans.

The home heating program’s cancellation was similarly disappointing news to Wawa Economic Development CEO Maury O’Neill, the administrator of the pilot in that northeastern Ontario community of 2,600.

She was notified by phone and email on June 22 that all GreenOn programs, including the Wawa Wood Heat Rebate Program, were closed.

“This program had economic benefit for this community.”

Seven weeks after its May 3 announcement, O’Neill had 27 Wawa homeowners signed up for the $2,500 rebate.

“It’s about economic development 101, plugging the leaks in lowering heating costs and keeping money flowing in the local economy.”

The former iron-ore mining town on the northeast shore of Lake Superior doesn’t have access to natural gas and pays the third highest electrical rates in Ontario, she said.

“For many reasons, this program makes sense to help an economically depressed community develop a new diversified economy.”

A wood heating trade show held in Wawa at the end of May was attended by more than 150 people, featuring workshops and displays from 12 companies, including one from Maine.

She said it sparked discussion with suppliers and distributors like Rutter about Wawa possibly becoming a regional hub for wood pellets.

Identifying biomass as an alternative energy source figured prominently into Wawa’s municipal energy plan even as the former Rentech wood pellet mill – once heavily subsidized by Queen’s Park – sits idle and up for sale on the edge of town.

O’Neill said she was notified by the government-in-transition that all programs are being reviewed and “clear direction” will be provided once the new government is sworn in.

Rebates will be honoured for those homeowners who had a signed agreement with a contractor for work to be completed by Aug. 31. The rebate application has to be submitted by Sept.30.

O’Neill said Wawa and other pilot communities intend to present a business case before the new government, asking for the program’s reinstatement and outlining the “huge economic benefits” to build Ontario’s bio-economy.

“I have to have faith that the new government coming in is open to creating jobs and building economies in Northern Ontario as they said on their platform.”

Navigation app breaks down barriers for the visually impaired
Jan 7, 2020 11:00 AM

Ottawa will take your comments on the Ring of Fire road
Dec 19, 2019 5:00 PM
Comments
We welcome your feedback and encourage you to share your thoughts on this story. We ask that you be respectful of others and their points of view, refrain from personal attacks and stay on topic. To learn about our commenting policies and how we moderate, please read our Community Guidelines.