Green energy provider preparing for the long haul to deliver wood pellets to customers
May 22, 2018 8:00 AM By: Ian Ross 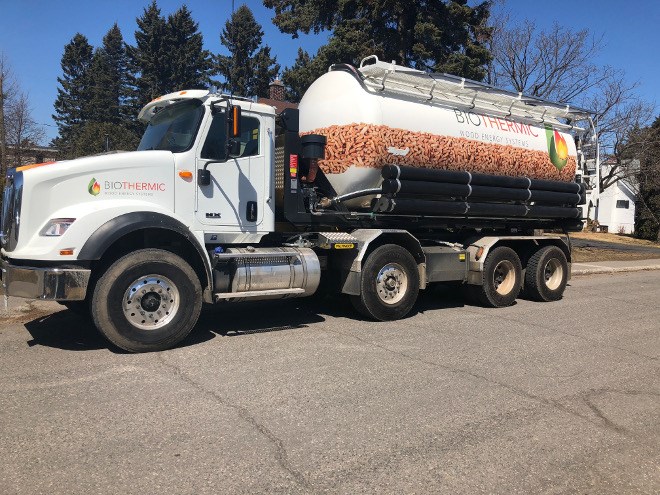 It’s an incentive program for residents and commercial property owners to switch out their inefficient wood stoves and heating systems for newer, cleaner burning wood technologies.

Though he said very complimentary things about the wood heating program in the government’s May 2 news release, Rutter claims the timing of his announcement was just serendipitous, if not very advantageous to the growth of his five-year-old business.

The program, which offers free installation of new heating systems in the Indigenous communities and a generous rebate in the other towns, could help spur a movement toward installing larger systems.

Rutter, a professional forester and arborist, is very motivated to see the growth in modern wood heating.

“We’re setting our sights, not on Ontario, but the whole country.”

The $400,000 truck, equipped with a silo body capacity of 14 tonnes, four-inch hoses and a blower system, stands to be a  turning point for the company, started in 2013. It’s their second bulk delivery truck. They operate an older vehicle out of their Haliburton operation in central Ontario.

The company specializes in automated wood boilers for large homes, commercial and institutional buildings with large pellet storage and conveyance systems, a market that’s been glacial to develop in Northern Ontario despite its abundant wood fibre.

Rutter readily admits he doesn’t have a burgeoning order book that necessitated the need for the delivery truck.

“We don’t have a customer base to pay for this truck. It doesn’t exist. But you can’t build a customer base without the truck being present,” said Rutter. “It’s very much the chicken and egg.”

Biothermic doesn’t plan to get into the pellet-making business but will serve as a broker, purchasing from established producers like Resolute Forest Products and BioPower Sustainable Energy, the new owners of the former Rentech pellet mill in Atikokan.

Canada’s wood pellet industry produced 2.8 million tonnes in 2017, most of which (2.4 million tonnes) was exported. The remainder was consumed in Atlantic Canada, Québec, and the Northwest Territories and by Ontario Power Generation.

Only a couple of years ago, Rutter felt discouraged with the slow adoption of clean wood-burning green technologies by consumers and government regulators. Since then, public perception and political views have considerably changed to favour wood energy.

Now it’s just matter of dealing with the economics, he said, such as the cost of trucking pellets to distant markets, and putting the permanent policies in place to incentivize this type of wood heating.

“We’ve had a big change in policy for regulating emissions from wood-fired combustors to make it easier to put in (these) systems. It’s still a headache but the barrier is gone,” said Rutter.

“Wawa pays the third highest electrical rates in Ontario. That is a fact,” she said.

The aging community has no natural gas pipeline and has always faced the uncertainty of pricing in heating oil and propane.

Helping to create a local consumer market for wood pellets fits well with the municipality’s strategy to develop its bio-economy. O’Neill anticipated that it just might encourage a company like Rutter’s to start bulk deliveries to homes and commercial establishments.

With $520,000 at Wawa’s disposal, she estimates 70 homeowners in town and from nearby Michipicoten First Nation and Hawk Junction will take advantage of the rebate. She’s also reaching out to local business.

As the administrator of the program, she’ll be pushing the rebate at an upcoming Wood Heat Trade Show at the end of May.